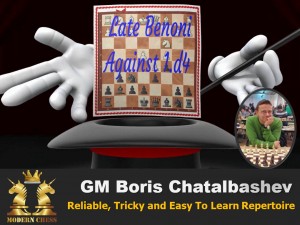 Building repertoire with 1. d4 is a tedious and time consuming task. Even more demanding is to build a repertoire against 1. d4. Fortunately, two expert coaches – GM Chatalbashev and GM Arnaudov – have decided to share their complete knowledge of how to act on both sides of the board. Their databases aim to prepare you to take your game to a different level and the two approaches nicely complement each other, making the difficult task look easy.

GM Chatalbasev shares his complete knowledge on the Late Benoni, emphasizing on the strategical nuances more than the concrete moves. GM Arnaudov explains how to play against Grunfeld using the so-called Russian System for a positionally sound approach where black struggles to find equality.

The two databases are part of the series that started with GM Delchev’s King’s Indian and the Complete Catalan The two new databases against 1.d4 come in a special Zurich Chess discount pack or as separate products.

Repertoire vs 1.d4 by GM Chatalbashev

In the the present database, he shares with our readers his main weapon that served him loyally during his long chess career – the so-called Late Benoni. The good news is that in this opening, the plans and strategical nuances are much more important than the concrete moves. Educational materials are structured in the following way: Theoretical part that includes the explanation of the main ideas, move orders and plans; and games that illustrate in practice the theoretical part.

Here is what GM Chatalbashev says about his favorite weapon against 1.d4: “When building an opening repertoire many players (myself included) prefer slightly off-beat and rare variations. Especially when they do not have time to study the latest novelties in modern lines. And also the opponent is expected not to have enough knowledge and experience in those rare openings, thus such an approach gives us some practical advantages. But what to choose? Most gambits do not have good reputation and rightly so, other rare openings like Classic Benoni, for example, are known to lead to a passive play. To our readers I offer a variation that had served me well during many years, it is solid enough, but far from being passive. It has no official name, but in chess literature is often called ‘Reluctant Benoni’ or ‘Late Benoni’. You should not be disturbed by the rather unimpressive name, most important is if your results with it are impressive”.

A complete repertoire against Grunfeld by GM Arnaudov

Nowadays, Grunfeld defense is one of the most dangerous Black’s weapons against 1.d4. The fact that this is an active and complex opening, explains it’s popularity among players from all levels from amateur to GM. Fortunately, we have good news for the fans of 1.d4 – Grunfeld will stop causing them nightmares. In his latest database, GM Petar Arnaudov provides you with a complete repertoire against Grunfeld. His recommendation is based on the so-called Russian System which arises after 1.d4 Nf6 2.c4 g6 3.Nc3 d5 4.Nf3 Bg7 5.Qb3. According to GM Arnaudov, Black is struggling to find an equality against this positionally sound approach. In his annotations, the author provides you not only with a huge amount of deep analysis, but also with detailed explanations of the basic positional ideas for both sides. After getting familiar with the Russian system, you can use it for a time being as your main weapon against Grunfeld defense.