After two peaceful rounds at the Grand Prix in Switzerland, the players came back from the rest day with renewed strength and put forth an exciting show for the spectators. Alexander Morozevich and Veselin Topalov emerged as the leaders of the event with 3.5/5 points.

Russian star Alexander Morozevich is showing great chess in Zug. He defeated Anish Giri with the black pieces in a very interesting struggle, both in terms of strategic and tactical ideas. The Russian chose a not so popular variation of the King’s Indian Defense in order to show his strength in open positions that require a lot of creativity. Giri used the usual plan of expanding in the queenside, and Morozevich answered with very original and precise piece play.

In a very asymmetrical position, Giri decided to exchange queens and entered into what turned out to be an inferior endgame. It is hard to criticize the Dutch’s decision as the arrangement of  pieces on the board is quite unusual and hard to evaluate. Morozevich came out on top after the time trouble and demonstrated great technique to convert the advantage into a full point. 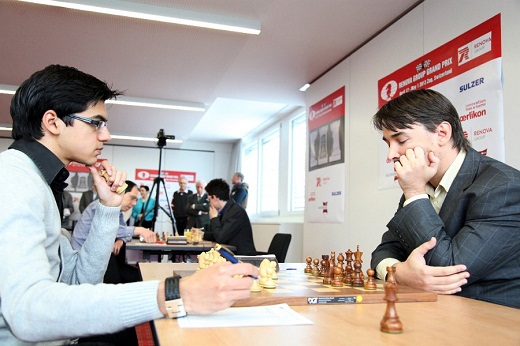 Veselin Topalov‘s win over Hikaru Nakamura was no big surprise, as the Bulgarian has been showing that he is willing to put out all his arsenal to go back to the very top of the elite. However, the fighting American is never easy to beat. Topalov needed 72 moves and only the threat of mate in three finally forced Nakamura to resign.

The game was played in the very fashionable d3-lines of the Spanish Opening. Topalov mainly used his initiative on the queenside to get Nakamura out of balance. This finally resulted in white getting a slightly favorable endgame. When the pieces were simplified to a rook endgame with a pawn race, the Bulgarian ended up being a tempo faster. He queened his pawn and obtained a mating attack that put him on shared first place. 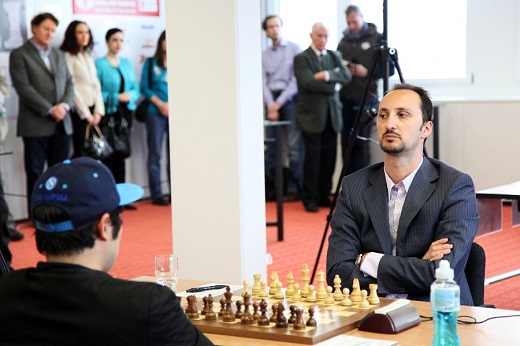 Sergey Karjakin and Shakhriyar Mamedyarov arrived to this round with four straight draws in the cross-table. The Russian was the one who put a positive score in his record after getting an impressive win with the white pieces.

Mamedyarov went for the Caro-Kann Defense, an opening where Karjakin has had excellent results in the past few years. The Russian used a sacrificial attack to get the full point in 40 moves. He gave up his knight on h6 to create an exemplary attack against the black king. The Azerbaijani would have needed to defend with extreme precision to come out alive. This victory puts Sergey in shared second place half a point behind the leaders. 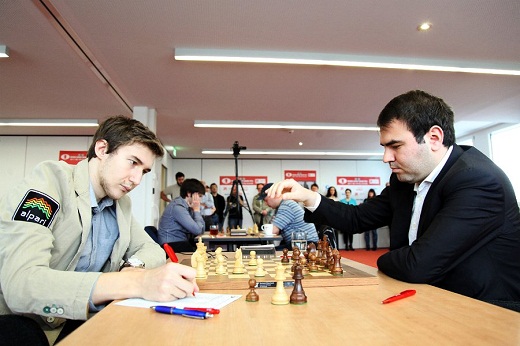 The other player that got to +1 was Fabiano Caruana. The winner of Dortmund, who comes from a period with ups and downs, defeated Rustam Kasimdzhanov out of a closed position that arose from an English opening. The Italian outplayed his opponent in a position with very unbalanced material. Just as Karjakin, this win puts him half a point behind Morozevich and Topalov with six rounds to go.

Teimour Radjabov is having a hard time recovering from his bad performance at the Candidates Tournament. Today, he lost against Gata Kamsky with the black pieces. The Rossolimo varitaon of the Sicilian was played once again – it has become a frequent visitor after the match between Gelfand and Anand. The American won a pawn in the middlegame and converted his advantage in the arising rook endgame. Kamsky, thus, bounced back to an even score, while Radjabov is now in the cellar with -2. 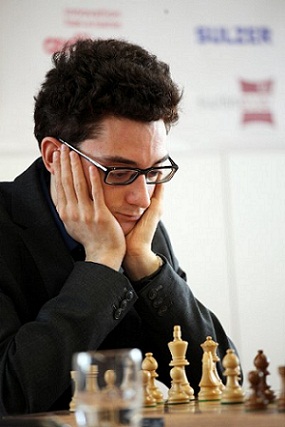 The only draw of the day came in the game that faced  Peter Leko and Ruslam Ponomariov.