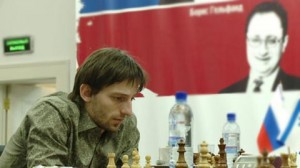 Currently, the top Russian players contending for the first board at the national team are GM Vladimir Kramnik  and GM Sergey Karjakin (4th and 5th in the September rating list) in an interesting clash of generations. However, their place might come under fire from close competitors, two of which will face each other in Khanty Mansiysk today.

GM Alexander Morozevich and GM Alexander Grischuk is one of the major encounters in World Cup round 3 today. GM Grischuk is the number 1 Russian player in the 2012 World Championship cycle, reaching the finals of the Candidate matches. GM Morozevich had a spectacular return, shooting himself up in the rating list.