The Moscow Blitz Championship is to be held on Sunday September 6, 2015 at the mall Gorbushkin Yard under the sponsorship of bookmaking company Liga Stavok. World Chess Federation (FIDE) President Kirsan ILYUMZHINOV will attend the opening ceremony.

The first edition of the Moscow Blitz Championship was held in 1948. It proved an immediate hit among the capital’s strongest masters and amateurs. Winners of past years went on to become chess legends, including world champions Mikhail Tal, Vasily Smyslov, Tigran Petrosian and Gary Kasparov. 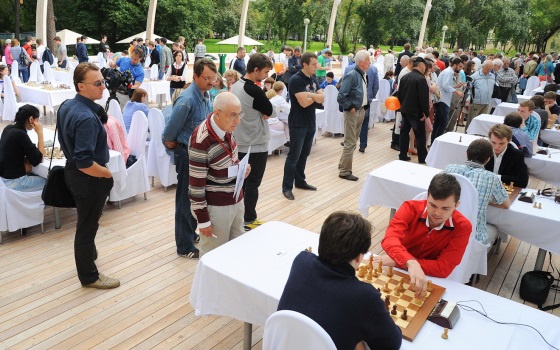 “For many years this tournament has been one of the main events of the Moscow chess calendar,” says Moscow Chess Federation president Vladimir PALIKHATA. “The capital’s chess players are excited about the affair, preparing for it, participating in preliminary competitions. The Moscow Blitz Championship is a proving ground for aspiring chess players against the leading grandmasters. On this day the grounds always carry the spirit of a holiday.”

In recent years in addition to the main, unrestricted section, players compete for titles in women, veterans, boys and girls sections. The combined total is 150 players.

The championship may be followed live via video webcast with commentary by by GM Sergey Shipov.

On the day of the competition Gorbushkin Yard guests are invited to the interactive chess playground, where everyone is welcome to participate in engaging competitions.

Another program of the day is a tournament among Moscow chess journalists and dignitaries. Present will be U8 Russian, European and World champion Ilya MAKOVEEV. Ilya is the poster boy of Liga Stavok, who awarded him a sponsorship with a monthly stipend as part of a social program to support talented sportsmen and national sport.