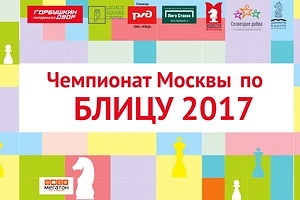 One of the main events in the chess life of the capital – the final of the Moscow Blitz Championship – will take place on Sunday, 3rd September, at the the media hall of the hypermall “Gorbushkin Dvor”.

This year’s event will be the strongest women’s tournament in history with Alexandra Kosteniuk, Ekaterina Lagno, Valentina Gunina, Olga Girya, Marina Nechaeva, last year’s winner Daria Voit, and other leading chess players not only from Moscow, but also from Russia.

The organizers are the Chess Federation of Moscow, the Department of Sports and Tourism of Moscow. Sponsors of the championship will be JSC Russian Railways and the bookmaker company “Liga Stavok”.

“Chess in Moscow regains its status as one of the most popular sports. And the Moscow Blitz Championship is one of the most important blitz tournaments in the world, where famous grandmasters take part. Veterans, children, and amateurs are not deprived of attention – special events are held for them. And the fans can watch the tournament both on-site and online,” said Vladimir Palihata, president of the Moscow Chess Federation.

According to the tradition of the last years, seven tournaments will be held on this day: two among men, one among women, boys, girls, veteran men, women veterans.