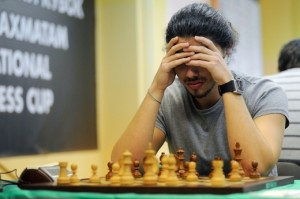 IM Burak Firat was the only winner of the round

The third round of the “Moscow Open 2013″ is being played, and we’ll bring you the most important news as they happen.

The less exciting group of the third round was the Young Grandmasters Championship for men. Four of the five games finished in draws.

The only decisive game saw the Turkish IM Burak Firat defeat the higher-rated Russian IM Alexey Reshetnikov in a very exciting Sicilian. Burak got the advantage in the opening with a double-knight sacrifice relatively known in this opening. The computer evaluates the position as almost drawn after the “mistake” by the Turkish: 18.Qh8, however, it’s very difficult to hold such a position with black over the board. The struggle finished at move 38 when the Russian admitted he was lost in the endgame.