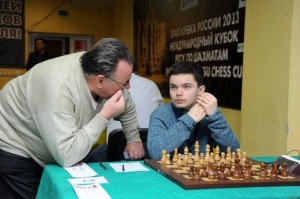 Illya Nyzhnyk before the start of the third round

The third round of the Moscow Open 2013 is being played at this moment, and we’ll bring you the most important news as they happen.

The 16 year-old Ukrainian Illya Nyzhnyk scored his third consecutive victory in the main group of the Moscow Open. He played against GM Kirill Stupak on the second board. In what seemed to become a positional struggle, the Ukrainian started to roll his kingside pawns down the board; the attack turned out to be too strong for the few black pieces that were defending on that side.

Another early winner of the round was the American Ildar Ibragimov. He beat IM Sergey Pavlov with the black pieces after playing an opposite-side castling French Defense. Ibragimov only needed 27 moves to prove that his pieces were faster to attack the opponent’s king, even though his own monarch seemed to be more open.