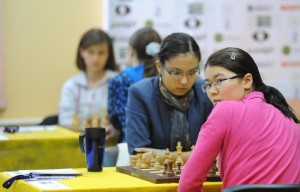 The third round of the Moscow Open 2013 is being played, and we’ll bring you the most important news as they happen.

The Kazakh WGM Dinara Saduakassova is the only player that got to this round with a 2/2 score in the Young Grandmasters Torunament for women, and she has already won her third round game, and what a game! The talented Dinara has created a deadly attack against her opponent’s king in a Sicilian Dragon, where Black exchanged the dark-squared bishop too early in the game – the result was a win in 26 moves, with mate in three on the board.

The only other result in that group was the draw between Daria Pustovoitova – who had a decent advantage out of the opening, but didn’t manage to use it correctly – and Nastassia Ziaziulkina.