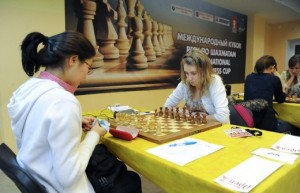 The only Mongolian player of the Young Grandmasters Tournament for women, WIM Altanulzii Enkhtuul, won her 4th round game and is now a point behind the leader WGM Dinara Saduakassova.

Altanulzii beat the untitled Russian Dina Drozdova in just 19 moves. Black already made a big mistake at move 11th, when she moved her king to h8 in order to put the knight on g8. This anti-development moves allowed the Mongolian to push her central e-pawn down the board, which resulted in a deadly attack put forth only by a knight and the threat of a smothered mate. The final position is very illustrative and is another clear example of the importance of development in the opening: four Black pieces are in their initial squares.