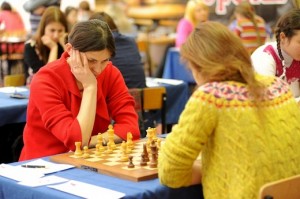 The Moscow Open 2013 women section has a sole leader for the first time in the tournament. After one of the encounters between the leaders (Ovod – Stetsko) finished draw, IM Marina Romanko used her chance and defeated WFM Lidia Tomnikova and secured a top standings position.

The game started with a 4.Qc2 Nimzo. Romanko, who played with the white pieces, decided to advance her queenside pawns and allow her opponent to gain space in the center, which eventually turned out to be the deciding factor in the game. Tomnikova went all-in with her e-pawn, putting it on the second rank, hoping to disturb white’s play, but that wasn’t the case. White eventually won a pawn, and when it was clear that she would also take black’s only triumph – the e2 pawn -, the resignation came.

With this result, Romanko is the only player of the festival that got 5 straight wins. Replay the game below.