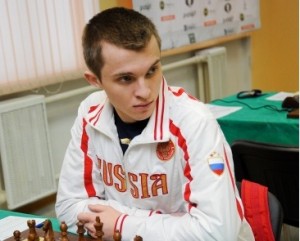 The surprising winner of the 2011 edition of the Moscow Open, the Russian IM Vladimir Belous, is the new leader of the Young Grandmasters Tournament. With his win today, he has 4,0/5 score, a half point advantage over the rating favorite Alexander Shimanov.

Belous won the main clash of the group in today’s round. The game featured two of the leaders in a direct encounter. IM Urii Eliseev played with black and chose the Petroff Defense. The game got very sharp when white decided to give up the bishop pair in exchange of a fractured pawn structure and the initiative. Black’s king seemed to be very weak, but Elisev defended precisely and, in a really complicated position, the computer engines even give him advantage. The game was decided in the time trouble, when the position was a complete chaos and both players made a lot of inaccurate moves. Scroll own to replay the game.