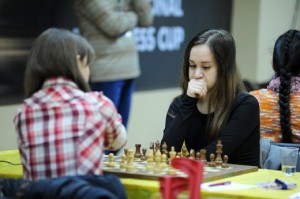 The Russian FM Daria Pustovoitova is now the only player in second place, after beating WGM Szczepkowska-Horowska.

Saduakassova’s victim of this round was the unfortunate Dina Drozdova, who seems to be out of shape with the third consecutive loss. The Russian played very passively in a Nimzo-Indian and the leader used her chance to gain space in the center.

When black played the very strange 24…Ne8, Dinara went for a kingside attack with 25.Ng4. Resignation came in the next move when it’s clear that black will need to give up her queen to avoid getting mated on the long dark-squared diagonal.

The other player that was sharing the second place a point behind Saduakassova, WIM Altanulzii Enkhtuul, lost her game with the white pieces, and now stands at a two points distance from the leader.