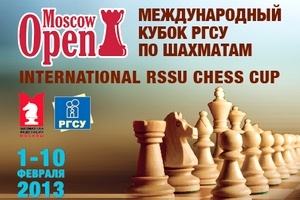 The Russian Grandmasters GM Dmitry Kokarev and GM Pavel Ponkratov moved into the joint lead after the sixth round of the main event in the Moscow Open 2013.

The main section of the Moscow Open started this round with eight leaders facing each other on the top four boards. Two games finished in draws and two with white victories.

Dmitry Kokarev defeated the American Ildar Ibragimov. The game started with a French Defense where white played an early f4. Black’s chances never seemed to be worse in the complicated position, and the computer even favored him giving an evaluation of -1.56 at some moment. However, Ibragimov seems to have taken a risky decision in the last move before the time control: 40…Ne2+ was the decisive mistake. The game finished at move 46, when white was about to capture a rook thanks to a fork by his queen. 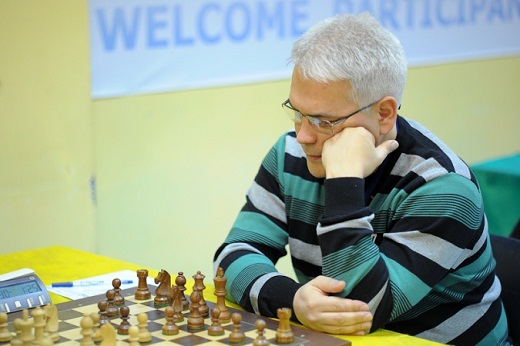 Ponkratov took much longer to break his opponent. Facing Kovalenko’s Caro-Kann, the Russian showed good positional skill and obtained a small advantage in the middlegame. It took him 86 moves to convert the favorable rook endgame into a win. 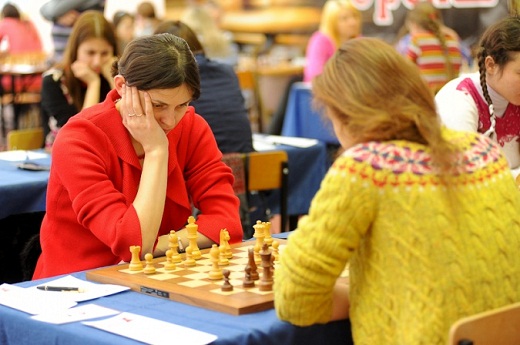 IM Marina Romanko is still enjoying her good run; she achieved her 6th straight victory in the Open for women.

In today’s round, the Russian defeated Nino Batsiashvili from Georgia. This time, Marina Romanko had to fight hard to win, as it took her 61 moves to finally beat her opponent’s defensive efforts.

The victory came when it was clear that one of the three passed pawns of black would promote despite the presence of opposite-colored bishops on the board. 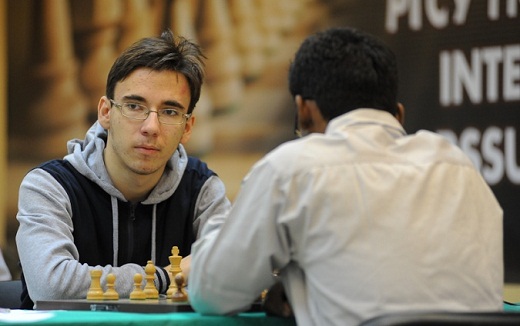 In the Young Grandmasters Tournament, Russian IM Urii Eliseev recovered from yesterday’s loss against Vladimir Belous and defeated GM Sethuraman with the white pieces. He is now half a point behind Belous in the standings and still has the chance to fight for the winner’s trophy with three rounds to go.

The game started with a sharp Sicilian. White gave up a piece for a pawn and the possibility of keeping the opponent’s king in the center. The Indian made a big mistake when he decided to defend his extra piece with a knight instead of a bishop and the game went uphill from there.

Eliseev used his initiative wisely and finished the game off by chasing the Black king with his queen and rook. Sethuraman resigned on move 31 when checkmate in 5 presented itself on the board.

IM Vladimir Belous maintained the lead in the tournament with 4,5/6. Shimanov and Eliseev are half a point behind. 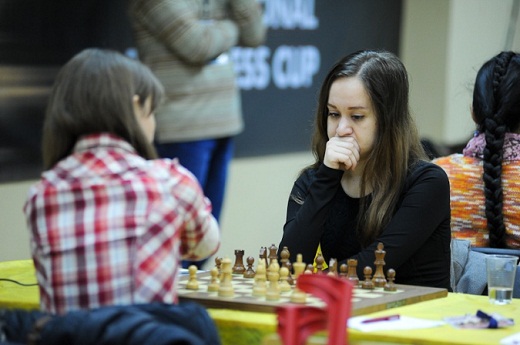 The Russian FM Daria Pustovoitova is now the only player in second place, after beating WGM Szczepkowska-Horowska.

Saduakassova’s victim of this round was the unfortunate Dina Drozdova, who seems to be out of shape with the third consecutive loss. The Russian played very passively in the Nimzo-Indian and the leader used her chance to gain space in the center.

When black played the very strange 24…Ne8, Dinara Saduakassova went for a kingside attack with 25.Ng4. Resignation came in the next move when it is clear that black will need to give up her queen to avoid getting mated on the long dark-squared diagonal.

The other player that was sharing the second place a point behind Saduakassova, WIM Altanulzii Enkhtuul, lost her game with the white pieces, and now stands at a two points distance from the leader.