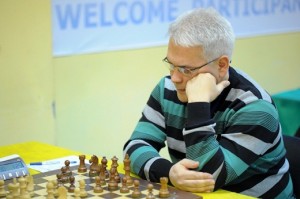 The main section of the Moscow Open started this round with eight leaders facing each other on the top 4 boards. Two games finished in draws and two with white victories.

The new leaders are both Russian: GM Dmitry Kokarev and GM Pavel Ponkratov.

Kokarev defeated the American Ildar Ibragimov. The game started with a French Defense where white played an early f4. Black’s chances never seemed to be worse in the complicated position, and the computer even gives an evaluation of -1.56 at some moment.

However, Ibragimov seems to have taken a too risky decision in the last move of the time trouble: 40…Ne2+ was the decisive mistake. The game finished at move 46, when white was about to capture a rook thanks to a fork given by his queen.

Ponkratov took much longer to break his opponent. Facing Kovalenko’s Caro-Kann, the Russian showed good positional skill and obtained a small advantage in the middlegame. It took him 86 moves to convert the favorable rook endgame into a win.