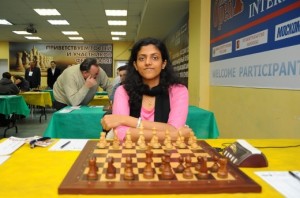 The third round of the “Moscow Open 2013″ is being played, and we’ll bring you the most important news as they happen.

A lot of strong players from India have arrived to the Moscow Open, and they seem to be ready to make a good impression. Eight of them got to the third round with 2/2, but unfortunately for them, there were 2 match-ups that faced them against each other.

M.R. Venkatesh was paired against one of the best players from his country – GM Surya Ganguly -, but anyway managed to beat him on the 5th board, after out-calculating his opponent near the time control.

B. Adhiban defeated the lower-rated Indian FM Diptayan Ghosh in 40 moves. The final position leaves a very good impression, with the white queen, rook and knight all lined up against a lonely king.

The third victory for the Indians was achieved by the Gibraltar Masters finalist GM Chanda Sandipan, who beat the Russian IM Mikhail Antipov with the black pieces, after nurturing masterfully a small advantage that he got in the middle game.

Not everything was good for the Indians. World Cup semi-finalist Harika Dronavalli lost on the first board against the strong Azerbaijani GM Rauf Mamedov, and Vidit Santosh Gujrathi couldn’t win against the lower-rated Venezuelan FM Alexander Hernandez.