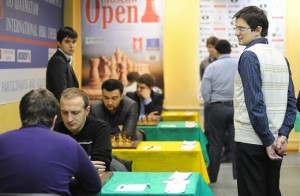 The main section of the Moscow Open 2013 is crowded again. After the quick draw signed in the first board game between Dmitry Kokarev and Boris Savchenko, a lot of players that were trailing by half a point have achieved wins that put them on the shared first place. After 8 rounds, there are seven players with 6,5 points. Anything can happen in tomorrow’s last round.

The draw on the first board came after 26 moves of a French Defense. Kokarev activated his pieces early, but wasn’t able to put his king in safety, so Savchenko was able to force a perpetual check and secure a chance to fight for the title in the dramatic ninth round.

One of the players that got to the lead was rating favorite GM Ian Nepomniachtchi, who beat the co-leader Pavel Ponkratov with the white pieces. In a tense fight, Nepo’s passed d-pawn proved to be too annoying for black’s defense and resignation came on move 73.