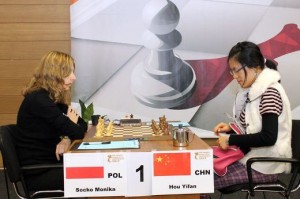 Shock and awe flooded the chess world in today’s round of the Women’s World Chess Championship in Khanty Mansiysk, Russia. The underdogs show started with a convincing win of Natalia Zhukova, who threw out of the competition the finalist from last year, Humpy Koneru. After winning with black yesterday, Zhukova did not go for silent draw today and with brave play defeated the 2600+ rated Indian. Koneru had her chances, but missed them in moves 28 and 29, after which pressure by white was converted to a full point.

The reigning World Champion Yifan Hou also fell victim in this round and was stunned by Monika Socko. Having the black pieces, the Polish experienced player did not hesitate to opt for aggressive play, control the center, and exploit her opponent’s mistakes to the maximum, closing the game in 33 moves. The score is now equal 1-1 and the game goes into tiebreaks.

In fact, this was not the only wrong step for China today, as no Chinese player goes directly in the next round. Zhao Xue and Ju Wenjun were held 1-1 by Nino Khurtsidze and Anna Zatonskih, and will all have to go through the tiebreaks tomorrow. Huang Quian was the only ray of light for China, as she eliminated Viktorija Cmilyte.

The surprises continued with the current European Champion Valentina Gunina being knocked out of the competition. She lost her match with white against Alisa Galliamova, after mixing up early in the opening.

All results of  the round