The 4th Mayor Cup International Chess Tournament 2011, organized by Venus Chess Academy and hosted by Goregaon Sports Club and Co- Sponsored by LIC, saw a good response of 280 players taking part in the tournament, out of which 15 are GMs, 30 IMs and 4 WGMs.

On the first table playing with white pieces Aleksej Aleksandrov (ELO 2618) against Madhurima Shekhar (ELO 1906) opted for Queens Gambit Declined exchange variation main line. On the 21st move Madhurima captured the knight of Aleksey which exposed her king to direct attack making her lose the game on 23rd move. 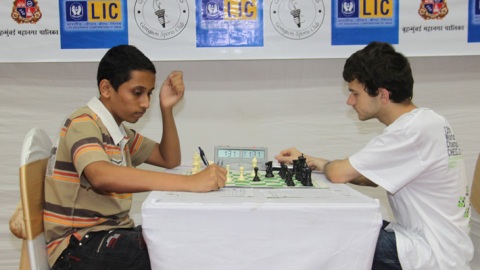 On the 2nd board Pune lad Atharv Godbole (ELO 1894) surprised everyone by drawing against the 2nd seed GM Kravtsiv Martyn (ELO 2583). The game which started in the Ruy Lopez went for closed variation. On 23rd move Kravtsiv played g6 which created a serious problems to him and gave a clear advantage to white. Thus seeing a losing position Kravtsiv offered a draw which was quickly accepted by Atharv.

On the third board GM Deviatkin Andrei (ELO 2580) played a long game against local player Vishwesh Kocherekar (ELO 1882). Vishwesh opted for French defense which was replied by a rare move from white. In the end game with opposite-coloured Bishops the experience of Andrei counted and he won the game in 48 moves.