GM Babujian Levon upsets his fellow countrymen 3rd seed GM Andriasian Zaven (ELO 2608). Zaven played Rosolimo variation of Sicilian Defense where he exchanged his bishop on ‘c6’. On 35th move Zaven offered his Rook for a pawn and a knight, to get a central passed pawn.

But Levon played excellently by placing both of his Rooks on 7th rank forcing to exchange one of the Rook, thus gaining clear advantage and the game in 50 moves. 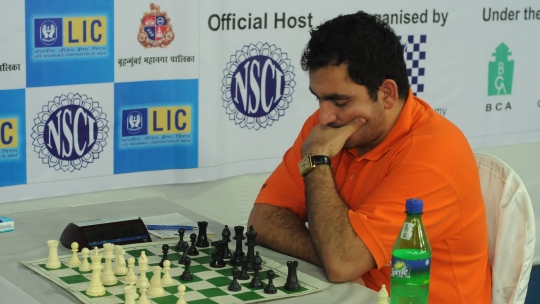 The game of English opening played between top seed GM Mchedlishvili Mikheil (ELO 2645) of Georgia and the GM Papin Vasily (ELO 2552) of Russia ended in quick draw after 12 moves.

On 3rd table GM Pantsulaia Levan opted for Reti opening against IM Rahul Sangma (ELO 2382) of Railways. On 20th move Rahul exchanged his Queen and opted for equal endgame. But on 22nd move Levan forced him to give his Rook for the Knight and won the game 42 moves.

In the 3rd round which concluded late in the evening yesterday saw 2 stunning upsets.

IM Aditya Udeshi of Mumbai missed a chance to beat the 2nd seed and Bhubaneswar Tournament Champion GM Amonatov Farrukh. Aditya was having 2 pawns more than Farrukh in the end game but due to 3 times repetition of position the game ended in a draw.