The name Murtas Kazhgaleyev is well known in the world of chess. Murtas is a member of the National Kazakhstani team during six World Chess Olympiads, winner of the Asian Games 2006 in Doha in rapid games. Last year he became the National Chess Champion for the first time.

Murtas has an interesting style of writing. Lately he started writing small stories taken from his own life and experience. He attracted attention of more chess fans who became interested not only in his chess performance, but also in continuation of his narrations.

ACF Media: Ok, let’s start with general questions. I know you live in Tashkent. Since when do you live there and why not Kazakhstan?

Murtas: I have had times when I used to live in France, for example, Cannes or Paris. I have spent more than 25 years in my native town Uralsk, west of Kazakhstan. Four or five years ago I made a decision to move to Tashkent to live there. It is really a very nice city. First time I went to Tashkent just to visit a performance of theatre Ilhom. It was the first reason I came to this city. Then I discovered more nice things in Tashkent: it is a warm city with nice people. I enjoyed living there, in a city with 3 million inhabitants. So, it is a nice experience for me, in comparison with my native small town of 300 000 people. 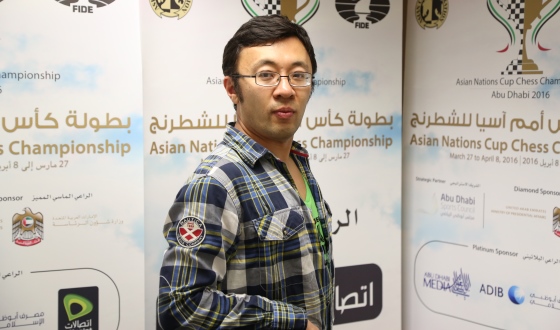 Probably I will move to another country and another city in the future. I am just curious and interested in discovering some new things. But now yes, for four years I have been living in Tashkent.

ACF Media: How do you manage to keep patriotic motivation when playing for the team of your country living in a different place?

Murtas: I am a player from Kazakhstan. I am also a coach of players from my country. For twenty years I play or coach chess only under the flag of my country. First time I played twenty years ago in the Chess Olympiad in Yerevan.

It is still very interesting for me: players are changing, new generation is coming, chess is changing as well, and I am still there. Though it is true that I am not a chess hard worker for the last 5-6 years. But still I try to do my best when I play a game. As I said chess has been also changing, but I try to keep my game. It is always more interesting to play in such competitions as Asian Team championships or Chess Olympiads than in open events.

ACF Media: You have a point saying that you have been playing chess for more than 20 years and you are still there. You won the last year National Championship. And this was for the first time in your career. Why only last year?

Murtas: I was not very successful in the previous national championships. I should also mention that I have not played in many of them. There were times I was a good player, having 2600 elo, even I remember I had 2650 once. I used to play more open tournaments in Europe and in Russia. Now ok, I am a weaker player, to be honest. I decided to play last year Championship to see how it will go for me this time. So I won it. Perhaps I could have won this championship before, maybe even 20 years back, but apparently something did not work well.

ACF Media: How much time do you spend on chess, let’s say, every day?

Murtas: I spend maybe two-three hours per week. During the tournaments I work more of course. I remember times when I used to work six-seven hours per day. And I thought that to be better you should have spent six additional hours. My poor wife suffered a lot. Then we divorced and I became a weaker player (laughing). I started to do some other activities: music, theatre. Last year for instance I ran in Moscow marathon as well. I like running.

ACF Media: Right, about your other activities. I got to know that last year you started writing small stories based on your own life experience. I found your stories very fascinating and interesting, and not only me. How did you come to this idea?

Murtas: Sometimes you need to express what you think and what you have experienced in your life. Sometimes your brains are overloaded with a lot of information. So, I tried to, let’s say, delete some information from my memory, and leave it on paper.

Also I believe that a life of a professional basic strong chess player, but not an elite one, is unknown to public. No one knows about our everyday life, or life during the tournaments with all these chess exercises, travels, etc.

I have visited something like 50 countries around the world, I have been playing chess for more than 20 years, so I have some experience and something to say. I decided to share with other people. When I wrote a story about my Australian trip, I realized that I was more or less successful with this experience. I decided to continue. I must confess it is not easy to play with words. Not less difficult as to play with chess pieces. It is interesting for me. In Tashkent I always try to meet with some writers and authors, we discuss how I can improve.

To my mind, chess players should start writing about their lives as well. We are about 1000-2000 professional or semi-professional chess players who play in the open tournaments. But we are from all continents: Europe, Asia. But everywhere we have the same points, problems and things to discuss.

ACF Media: One quick question about Australian story: all the characters are true or fake?

Murtas: They are all true. Of course I keep some secrets, but basically it is all true. I would also like to mention that my friends from Australia invited me this year again to participate in their open tournament.

ACF Media: So, we will have another story from Australia?

Murtas: I don’t know yet, anything may happen. Australia is really great country. It is really far from anywhere. And I am very grateful to all people who helped me to make this trip happen. When you have this trip once playing four-five tournaments in a row it is a great experience. But to do it again, it might be a real challenge.

ACF Media: About the Asian Nations Cup. How are you doing so far?

Murtas: For the moment I think we are doing alright. We are on third place after 6 rounds. We lost one match against strong team from India. I personally lost my game against Vidit Santosh. I had a pleasant position. In a time trouble I made some mistakes and I missed a draw after time control. Later on I started to play better and won three games in a row. Our team also won three last matches.

Today we play against Chinese team. I am having a rest day for the first time during the tournament. These three last rounds will be decisive. I hope that we will get good results: we have all reasons for that: our team spirit is good, we had victory against Vietnam and we are well prepared after all.

ACF Media: How do you like the overall organization of the tournament?

Murtas: Everything is just perfect. Playing hall is good, food is just fantastic. Just one thing: time schedule is very tough: no time to visit Abu Dhabi. Fortunately I was not playing today and took this chance to visit the Abu Dhabi Ferrari Park, the biggest park in the world, with a friend of mine from Uzbekistan Alexei Barsov. By the way, he has a birthday today: Alexey, happy birthday again! So, we spent an amazing day today. Though it was scary a bit, but you cannot resist from not trying it. It was a real fun, we enjoyed it.

ACF Media: I wish you get medals and successful tournament for you and Kazakhstan.

Murtas: Thank you so much for inviting. Good luck to everyone!