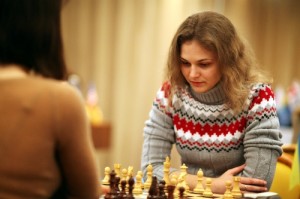 In the eighth round of the Neva Fondation Women Grand Prix, the game between the leaders Anna Muzycuk and Bela Khotenashvili finished in a draw, so both players kept their privileged position before the second rest day. Kateryna Lahno and Tatiana Kosintseva won their games and share third place half a point behind.

One of the central games of the tournament was the encounter between Hou Yifan and Anna Ushenina, as in a few months they will play in the World championship match in China. World champion Anna Ushenina outplayed Hou Yifan with the black pieces after 40 moves and, after 8 rounds, shares 5th place with Ju Wenjun, who lost against Alexandra Kosteniuk. The game between Viktorija Cmilyte and Tuvshintugs Batchimeg finished in a draw.

Nana Dzagnidze got a position with a big advantage after the opening, as her pieces were better placed than her opponent’s and she had good play on the queenside. It was possible to increase her advantage step by step with 21.Rf2 22.Rb2, but Nana decided to grab a pawn on the kingside, which also seemed logical. Despite the fact that she opened the g-file for Black, her position was still much better. At the same time, Black got very good practical chances, as it was not easy for White to play precisely under the time pressure. After a few inaccurate moves, the Georgian player had to force a draw but missed 35…Rb3, and from that point on, it was Black the one who started to play for a win. After 79 moves, Kateryna Lahno won the game. 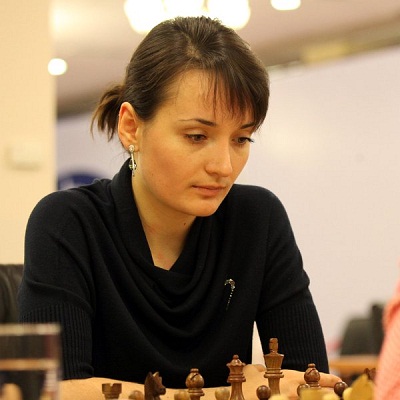 The first draw for the uncompromising Georgian player! Anna Muzychuk did not have problems to equalize with Black and after 12…Qb6 transferred the game into an equal ending. The game finished after a threefold repetition.

The game finished in draw but only after the evaluation of the position would change a few times. The position was about equal after the opening, but then Viktorija transferred the position into the endgame where her pawn structure was worse than her opponent’s. After 37.g4 h5, White got a slightly better position and after 42.h5, Tuvshintugs Batchimeg could have gotten a decisive advantage. White missed his chances after 48.Rg6, as the rook endgame was drawish. 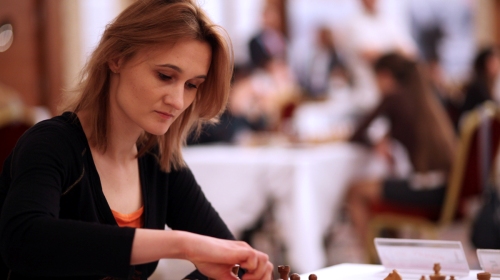 Tatiana Kosintseva decided to play a new line with 7.Be3 in Caro-Kann, compared to her games against Alexandra Kosteniuk where she chose 7.b4. Olga Girya was not ready for this variation and played Bf3, which seemed like a dubious decision. Black started to have problems with development and after 13.c4 Qa5, the position of Olga Girya became hopeless. During the press-conference, Olga pointed out it would be better to play Qa5 on the 12th move, instead of Nf5.