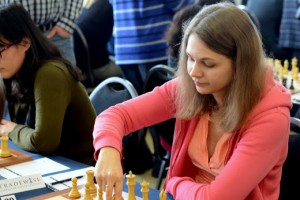 In the ninth round of the Neva Fondation Women Grand Prix, both leaders Anna Muzychuk (Slovenia) and Bela Khotenashvili (Georgia) won their games and share first place with 6,5 points. The Georgian player defeated Olga Girya to complete her last GM norm. Tatiana Kosintseva (Russia) outplayed Katerina Lahno and is placed third half a point behind the leaders. The Chinese derby Hou – Ju finished in a draw as well, as did the games Ushenina-Dzagnidze and Cmilyte-Kosteniuk.

“I didn’t have any problems in the opening and I think the position was about equal”, said Alexandra Kosteniuk at the press-conference. At the same time, she was not sure if 10…e5 was the correct move, as after castling short, she did not know what to do. Both players agreed that after 14…c5, Black could equalize the position but Alexandra simply missed this chance and had to play precisely not to get into trouble. The position became very complicated after 25.Rd8-Rg8.  White could have played 27.Ng3 and transfer the game into the ending with an extra-pawn. Viktorija Cmilyte chose to play 27.Bd5 instead and missed 27…Bb7. White’s rook was trapped and Lithuanian player had to sacrifice her knight in order to free her rook. The player ended up in a rook against bishop and knight endgame. Black missed a few winning opportunities and the game finished in a draw after 70 moves.

As Bela Khotenashvili pointed out during the press-conference, she knew that a draw in the game would give her the last GM norm and tried to play safely. Black didn’t face any problems in the opening and the position was about equal after 20 moves of play. However, Olga Girya played inaccurate 26.Qd4 and lost a pawn while 26. Rf4 would lead to the position with equal material and chances.  From that moment on, White was suffering and tried to find drawish chances in the endgame. Bela Khotenashvili missed a few chances to win and after 74 moves the endgame with kight against rook appeared on the board. After 5 and half hours of play, both opponents were really tired and did not play precisely. Olga Girya made a mistake on the 108th move and lost the game. 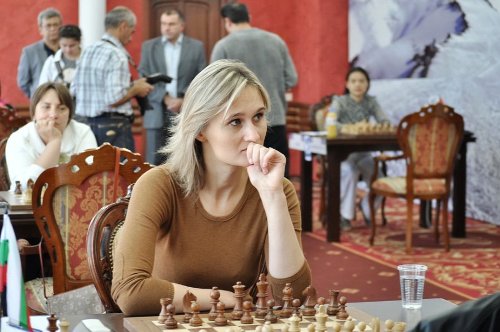 Nana Dzagnidze got a comfortable position with Black and created an isolated pawn in White’s camp. Anna Ushenina did not manage to get any initiative on the kingside because Anna Dzagnidze accurately changed the pieces and transferred the game into the endgame with slightly better chances for Black. The last opportunity to play for a win was to exchange the rooks, 28…Rc2 29. Bc2 f6 30.Ng6 Bf3, but both players agreed that, with accurate play, White should be OK.  The game finished in a draw after a threefold repetition.

Ju Wenjun chose to play the Catalan and knew the theory quite well. Ju Wenjun remembered the games that continued with 14…Rb8, so 14…h6 was quite new for her. Despite the fact that White had an extra pawn, Black managed to get enough counter play. All heavy pieces left the board and the players signed the peace treaty after 40 moves of play.