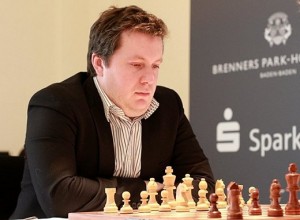 The most expected game of the round has also become the most interesting. After 24 moves, the computer gives Naiditsch a winning advantage, however, the time trouble is looming its head and it will be very hard for the German to find the precise lines that convert this advantage.

The Exchange Spanish became very sharp on move 21 when the German, once again, advanced his g-pawn. This decision is completely coherent with the kind of play that Naiditsch has shown in this tournament, going for complications instead of taking the safe route.

We must add the fact that Caruana has less than 12 minutes to complete his last 15 moves.

Meanwhile, Fridman and Adams have already signed a draw and the game Adams-Meier has arrived to an opposite-colored bishops endgame where they will probably split the point after some exchanges.