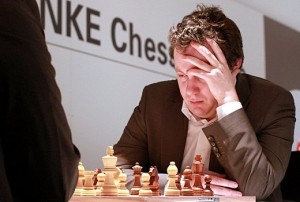 Naiditsch only made a draw in the event

Arkadij Naiditsch keeps demonstrating that he’s willing to fight for every half point at all costs. He defeated Daniel Fridman in a very exciting 45-moves game to reach the second place, half point behind Fabiano Caruana.

The game started with a King’s Indian Defense where Naiditsch chose a direct pawn advance on the kingside, probably knowing that this would be uncomfortable for his solid colleague. Leaving the opening, it seemed that Fridman had a good position with better positional features due to the backward black d6-pawn and the weaknesses around his king.

The sacrifices chosen by Arkadij reminded of the failed attempts to attack the World Champion two days ago. However, this time the offensive was well justified and the initiative was enough to put Fridman in deep trouble. When they got to this stage of the game, both players had very little time on the clock to make a considerable amount of moves. This fact makes black’s 37…d5 move even more impressive.

Fridman resigned on move 44 when it’s clear that the simplification will lead to a winning endgame for his opponent.

It’s noteworthy to point that Naiditsch played 5 of the 6  decisive games in the tournament; he only signed a draw on the first round.  A very welcomed fighting spirit by the spectators!