• Hikaru Nakamura and Maxime Vachier-Lagrave qualify for the London Chess Classic Final, the concluding event of the Grand Chess Tour, after a pulsating day of Rapid and Blitz, beating Fabiano Caruana and Levon Aronian, respectively.

• Nakamura and MVL both take the lead in the Rapid games, then clinch their places in the Final with blitz victories.

• The British Knockout Semi-Finals, also taking place at Google DeepMind’s offices in London, are won by Luke McShane and Gawain Jones. McShane’s surprise win over Mickey Adams comes despite a valiant fightback by the England No. 1, who won three blitz games in a row to stay in the match.

Hikaru Nakamura qualified for the Grand Chess Tour Final by beating World Championship Challenger Fabiano Caruana 18-10 after the Rapid and Blitz portion of the Semi-Finals on Thursday, joining Maxime Vachier-Lagrave, who defeated Levon Aronian by the same scoreline.

Both Nakamura and Maxime Vachier-Lagrave pulled ahead in the second Rapid game, and then pressed home their advantage in the Blitz games.

These results set up an intriguing Grand Chess Tour Final between two acknowledged Rapid and Blitz experts. Vachier-Lagrave’s results enabled him to overtake World Champion Magnus Carlsen in the live Blitz ratings, rising to 2948.2 versus Magnus’s 2939.0, according to Live Ratings website 2700.com.

In the British Knockout Championship, Luke McShane pulled off a surprise 16-12 victory over England No. 1 Mickey Adams, despite Adams winning three Blitz games in a row to stay in the match. But the final twist of fate came in the fourth and final Blitz game, in which Adams, with a winning position, fell for a basic knight fork to lose his queen.
In the other British KO Semi-Final, Gawain Jones defeated David Howell 18-10. Leading after two Classical games 1.5-0.5, Jones lost the first Rapid game but then clinched his victory with three Blitz wins.

The action now moves to Olympia London on Saturday, with the same three-day format of 2 Classical games, followed by a third day of Rapid and Blitz games. 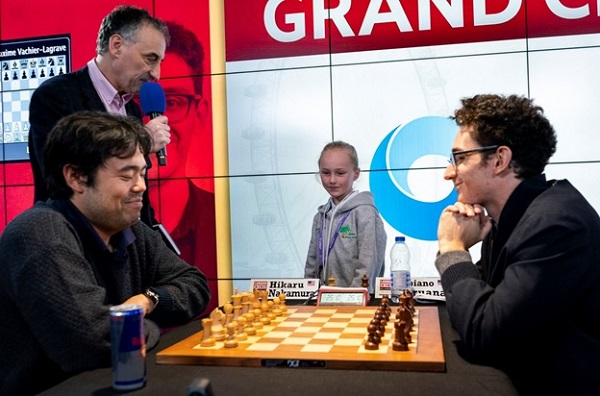 Hikaru Nakamura and Fabiano Caruana are all smiles as Malcolm Pein, CEO of Chess in Schools and Communities, asks Martha of Park End School in Middlesbrough to make the ceremonial first move before the first Rapid game 1 on Thursday. (Photo: Lennart Ootes)

Media editors may use photos online from the London Chess Classic website’s Flickr account as long as they are credited to the LCC and the photographer. For permission to use the photos in print publications, editors should contact the photographer.