American Grandmaster Hikaru Nakamura defeated Frenchman Maxime Vachier-Lagrave in the London Chess Classic and Grand Chess Tour Final by the super-slim margin of 15-13 – the win of a single blitz game – after a nail-biting sequence of seven draws.

After several rapid and blitz games where the difference between the two players hardly ever threatened to become of decisive proportions, in Blitz Game 4 Nakamura repeated a line of a hybrid Grunfeld-English they had played earlier in the match.

Vachier-Lagrave began to suffer after he unwisely moved his queen to the kingside with 15…Qf5, when its lack of safety became a decisive factor.

Thereafter Nakamura took control of the centre and allowed MVL’s queen no respite, with the death-knell for MVL coming with 24 Ng5, when the queen is cornered. The picturesque final blow was delivered by 29 Bg4!, forcing the win of the queen due to a killer knight fork.

Both players’ match strategy appeared to be aimed at surviving with Black and waiting for the Blitz portion of the match. Nakamura’s adoption of the super-solid Berlin Wall defence in London marked a departure from his usual counter-attacking style, but it paid off in the end.

In the Third Place Playoff match, US World Championship challenger Fabiano Caruana managed to salvage some pride, coming out on top in the Rapid and Blitz games against Armenia’s Levon Aronian, winning the second Rapid game and the final two Blitz games to secure victory by the score of 16-12.

(The scoring system awarded 6 points for each Classical game, while the Rapid games are worth 4 points and the Blitz games 2 points.)

Caruana’s payday was $60,000, while Aronian had to be satisfied with $40,000. Caruana’s third place guarantees him a place in the 2019 Grand Chess Tour, the GCT announced today.

In a press release, The Grand Chess Tour announced on Monday it will be expanded to include two new Rapid and Blitz events, in India and Cote D’Ivoire, which will replace the St. Louis Rapid & Blitz, while there will be a new Classical tournament in Croatia. The total prize fund will also be increased, to at least $1.5 million, and Gameplan Sports Pvt. Ltd, one of India’s foremost corporate and sports branding agencies, has been appointed as an official sponsorship and branding partner. 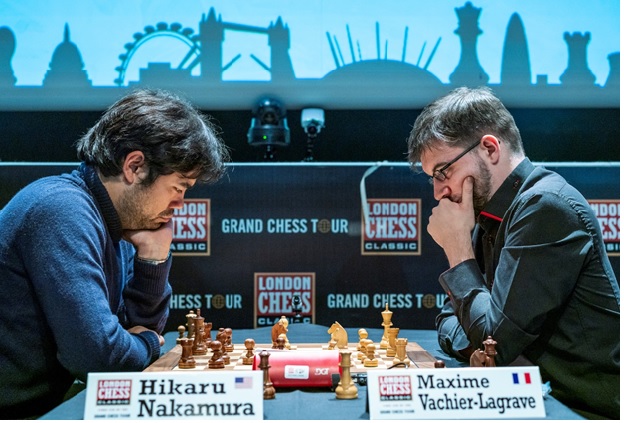