It is still unclear whether this means that the event is pushed few months back or canceled altogether until the next October. We are trying to obtain more information.

In any case, the “postponement” doesn’t mean that China is losing enthusiasm in organizing top notch events. This summer Ningbo hosted the World Team Chess Championship, the city of Qin Huangdao is putting a generous 87,000 USD for an open tournament which is starting in two weeks and Beijing is preparing for the 320,000 USD worth 1st SportAccord Mind Games. 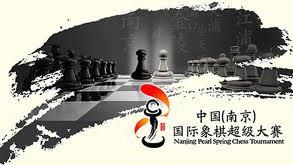