Aravindh Chithambaram of Tamil Nadu, the country’s highest U12 rated player who became the youngest to win the National Junior Championship that concluded at Goa on Sep 14th upsets the top Indian GM Deep Sengupta on the 2nd day of the 4th Mayor’s Cup International Chess Tournament 2011 organised by Venus Chess Academy co-sponsored by LIC.

On the 3rd table playing with white GM Deep Sengupta (ELO 2572) against Aravindh Chithambaram (ELO 2213) opted for Sicilian Dragon. The game was equally poised till on the 30th move Aravindh captured the central pawn. After exchange of the Queens, in the endgame Aravindh’s Bishop became far more superior than the Knight of Deep.

Aravindh got his Bishop on g3, followed by the Rook on the 2nd rank. Deep accepted his defeat when he was threatened with a mate or a loss of piece. This was a surprise to everyone. 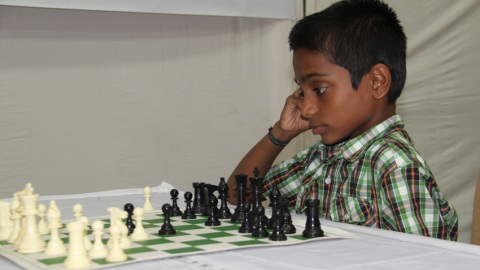 One the 1st board the top seed Aleksandrov Aleksej (ELO 2618) playing with black pieces against WGM Kiran Manisha Mohanty (ELO 2213) opted for Ruy Lopez setup. By his clever maneuvering on the board he created a central connected passed pawn, which made Kiran resign the game.

On the 2nd board Satara’s Sameer Kathmale (ELO 2209) playing with the 3rd seed GM Andrei Deviatkin (ELO 2580) faced Classical Caro-Kann defense. Sameer developed his pieces rapidly and posted his Knight on d6 square with commanding position. Although he won a pawn, he allowed his opponent to eliminate the pieces and reached rook ending where he could not exploit the advantage of extra pawn and thus shared the point.