Round 2 of the Grand Chess Tour Romania 2022 started in an interesting fashion with a surprising opening choice by Maxime Vachier-Lagrave (MVL) who chose the QGA (Queen’s Gambit Accepted) against Wesley So. Although four of the five games ended in a draw, Mamedyarov – Rapport and Firouzja – Nepomniachtchi were fiery dynamic games that did not disappoint the fans or commentators.

The day ended with a win for GM Ian Nepomniachtchi who was able to convert a topsy-turvy game against the talented Alireza Fiouzja. The audience also had the chance to see an interview with Legendary World Champion, Garry Kasparov, who was delighted with the organization and the progress of the Superbet Chess Classic Romania thus far. See the full interview here

With today’s win, Ian Nepomniachtchi joins Wesley So as a co-leader of the Superbet Chess Classic Romania after the conclusion of Round 2.

Replay the games from the 2nd round:

The only winner of Round 1, Wesley So, was up for the task of making the most out of his second White in a row. However, the opening might have caught him by surprise when he faced MVL’s QGA (Queen’s Gambit Accepted), something that is not considered in MVL’s regular repertoire (being famous for the Gruenfeld Defense). The players went down a well-known theoretical labyrinth where they both seemed familiar with the best strategic plans. Wesley So may have had the chance to push further with 24.Qf4 instead of his choice 24.Qf3. Whether it was enough advantage to carry on playing or not would require a deeper analysis, but it seemed that both players didn’t think it was enough to continue pushing for more. As a draw seemed the most likely outcome of that position, a repetition ensued and this was the first game to finish for the day.

A happy GM MVL  at the interview after drawing Round 2| Photo: Grand Chess Tour, Lennart Ootes

Mamedyarov essayed 1.e4, which came as a surprise for Rapport because Mamedyarov is almost exclusively a 1.d4 player. The game shortly was transposed to the French Defence, one of Rapport’s pet-lines. Rapport’s choice was risky and White soon gained the initiative. Although the position suited Mamedyarov’s style, and several possibilities were present for him, the position was difficult to assess and unexpected defensive ideas were found by one of the most creative top players – Richard Rapport. After a long series of accurate dynamic moves, the game ended in the most exciting draw of the day shortly before the players reached their time control.

The game between GM Deac and GM Aronian also started with a QGA (Queen’s Gambit Accepted), which Aronian suggested in the post-game interview, that has gained popularity in recent years thanks to Fabiano Caruana.  For a short period of time it seemed that Deac could reach a promising position should he have tried 16.f5. Instead, he chose a passive approach which allowed Aronian to gradually outplay his opponent. Around move 34, it seemed that Aronian was pressing, in a rooks and bishop versus rooks and knight endgame, but he chose not to trade off a pair of rooks with 34…Rxd1 followed by Rb2 and maintaining the pressure, and the position simplified quickly into a draw.

The two Americans started with a Four Knights Sicilian, which transposed into a Lasker-Pelikan Sveshnikov Variation. Dominguez’ response was solid, but it never caused any hardship to Black’s position. Caruana defended accurately and the game ended in a draw by repetition on move 47. Read more: Caruana, Rapport and Dominguez comment on the Grand Chess Tour Romania playing venue 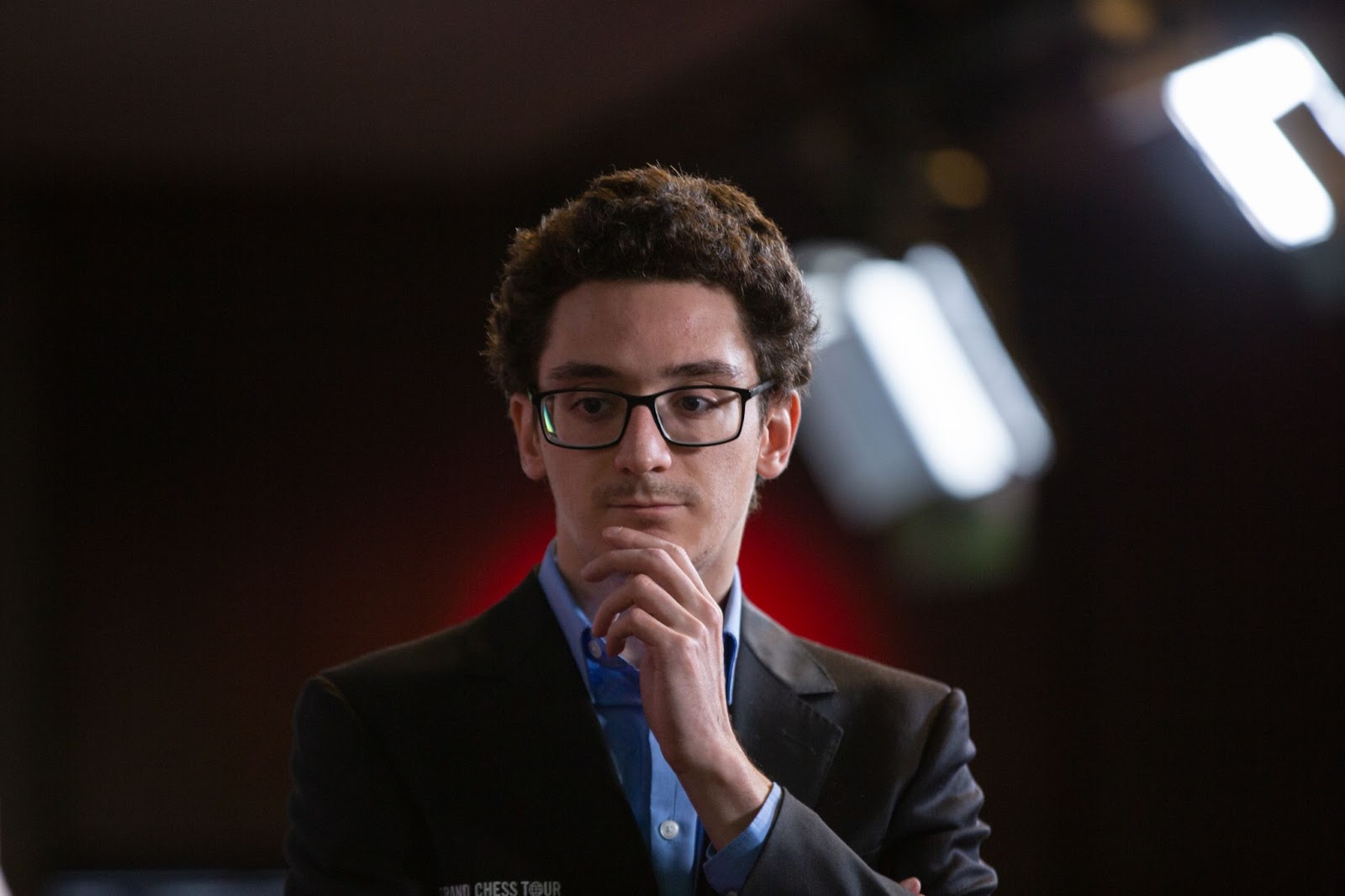 GM Fabiano Caruana looking calm after surprising his opponent in the Sveshnikov in Round 2 | Photo: Grand Chess Tour, Bryan Adams

The game between Firouzja and Nepomniachtchi has been by far the most exciting game of this event so far. Firouzja began the game ambitiously and chose 2.Bc4 to avoid Nepo’s Petroff, and as GM Yesser Seirawan suggested in the live commentary, Alireza seemed to have played the game as if “he had to win at all cost”, which is, of course, no wonder given the psychological battle that the two players will soon have to face in the upcoming Candidates Tournament. The players knew their lines and blitzed through their moves up to move 16, where Firouzja refrained from Ne3, choosing 16.h3 instead. The move did give Black some edge; yet, the position was complex and the advantage slipped through each player’s hands a number of times until nearing the time control,  Nepo reinforced his initiative and by move 40 he was completely winning. Nepo seemed to have given up part of his advantage by choosing to take the exchange on e1, with 42…Nxe1, instead of taking his time with 42…Qxh3. Firouzja may have had the chance to hold on to the position, but he missed it and Nepomniachtchi ended up scoring an important victory for the day.

Round 3 games live on Chessdom.com: