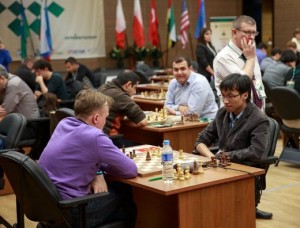 The first day of the FIDE World Rapid and Blitz Championships 2013 in Khanty-Mansiysk is over. 58 participants from 17 countries started their fights for the chess crown.

The first symbolic move on the 1st table was made by Alexey Putin, the vice governor of Ugra, in the game between Alexander Grischuk – current world champion – and Ivan Popov, the 2012 champion of Moscow.

At the mean time, Alexey Dreev and Shakhriyar Mamedyarov from Azerbaijan were half a point behind. In the 5th round, Nepomniachtchi and Ildar Khairullin agreed a draw on the 16th move; Dreev outplayed Victor Bologan from Moldavia and caught the leader.

The current situation at the end of the day is as follows: 1-2. Nepomniachtchi, Dreev (both players from Russia) both have 4.5 points, 3-4. Mamedyarov, Khairullin both with 4 points, 5-12. Alexander Grischuk, Dmitry Andreikin and Vladimir Potkin (all three from Russia), Victor Bologan (Moldavia), Francisco Vallejo (Spain), Ivan Cheparinov (Bulgaria), Gata Kamsky (USA), Eltaj Safarli (Azerbaijan) all have 3.5 points. Full standings below.

Among the men participants, there is a woman chess player, Kateryna Lahno from Ukraine, twice European champion. She made 4 draws but lost against Boris Grachev (Russia) in the 5th round.

6th-10th rounds of the Championship are scheduled for Friday June 7th, the second tournament day.

The World Rapid Championship will be held in the Ugra Chess Academy on June 6th – 8th. Participants will play fifteen games – five games per day. According to the Regulations, the time control is 15 minutes until the end of the game plus an additional 10 seconds per move. All monetary prizes are shared equally, in cases of any tied positions. 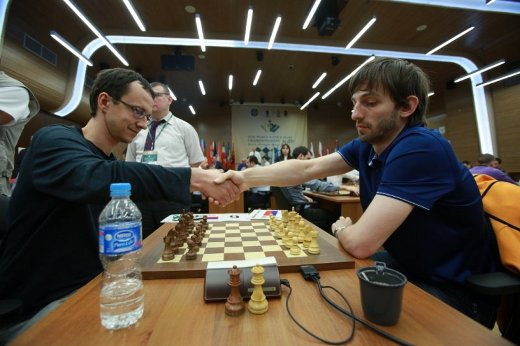 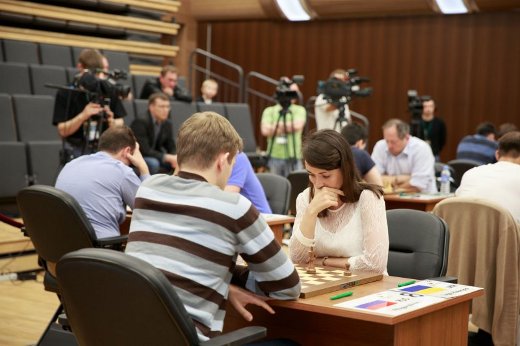 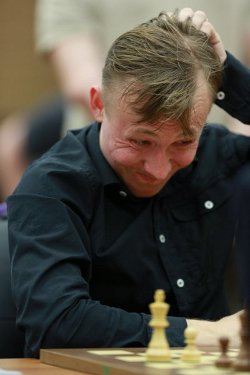 Photos by Kirill Merkuryev and Maria Emelianova for the official website.