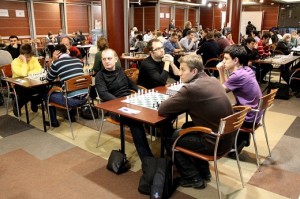 Expecting for the round to begin

The massive Aeroflot blitz tournament continues in Moscow and the favorites are starting to show why they have earned their status. Ian Nepomniachtchi leads with 11,5/12 and Alexander Grischuk is close behind with 11,0/12 points. They face each other in the 7th double-round.

Nepomniachtchi played against the early leader Alexandra Kosteniuk in the 5th round and defeated her with a 2-0 score. The ex-World Champion could not recover from this loss and remains with 8 points, after losing her match against the Venezuelan GM Eduardo Iturrizaga – who now stands at 10,0/12.

In one of the exciting encounters of the day, Nepomniachtchi won against the recent winner of the Moscow Open Boris Savchenko. Exactly this victory put Ian in sole first place.

Alexander Grischuk deserved his second place so far after defeating GM Gata Kamsky in the 6th round.