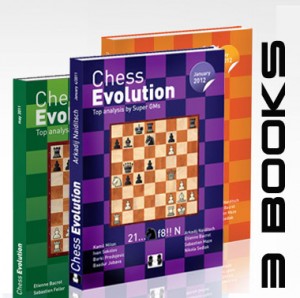 Besides them, GM Konstantin Sakaev, twice Olympic champion, is joining the Chess Evolution team and will be publishing two books on the Slav defense. The first one is coming in June, the second one is scheduled for later this year.

Purchase the 3 new books of Chess Evolution and the 2 books of GM Sakaev with 20% discount at the Chess Shop.

Konstantin Sakaev is not only a great Russian player, but a very experienced trainer and writer, to which he dedicated his last 3 years.  During his active time as a chess player, he was one of the biggest experts in Slav, the most played opening at the current moment on the very top level by players like Carlsen, Aronian, and Anand.

With the “Complete Slav” series you are becoming an expert for White as well for Black, having the trendy lines and fashion analysis of the most recent theory.