The man with the cap was the sole leader after 10 nerve-breaking rounds in the 8th FiNet Chess960 Open, but in the final round, Gata Kamsky lost his only game against former world champion Rustam Kazimdzhanov. This loss paved the way for Alexander Grischuk, who won the massive Ordix Open twice, to clinch home his third Mainz Open title. He kept his cool in the last round against German ace Rainer Buhmann and won the 8th Edition of the FiNet Chess960 Open with 9,5 points.

This last minute victory avoided a total American Chess960 domination in Mainz. Hikaru Nakamura won the Chess960 world championship and the American program Rybka won the Livingston Chess960 computer tournament for the third time in a row. The late Bobby Fischer, the inventor of this fascination chess variant that gets more and more attention on all levels, would have smiled in heaven. 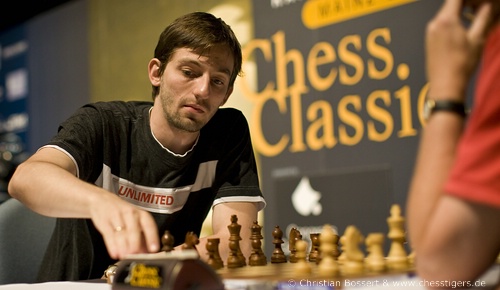 Despite his tremendous victory, Grischuk was not too happy with the way he played in the Chess960 Open. “I had a lost position in three games”. But Grischuk, winner of the online Chess960 qualification tournament on the Internet Chess Club, showed that he is a tough player to beat. “And you need a little luck as well to win an Open like this”, the Russian smiled. He added: “My main goal is to win both the FiNet and the Ordix Open in one year”. Maybe he can be the first player in Chess Classic history to reach this unearthly goal. He will give it a shot tomorrow!

Kamsky, who scored nine points in the end, was downhearted after his terrible loss in the final round. He was in the lead from the word go and losing the final game is an experience that even a hard-boiled chess professional like Kamsky will not easily forget. He just needed a draw to win the tournament. His opponent Kasimdzhanov showed his ambitions and all his class in his last game against the American. In the end he shared 2nd place with Kamsky.

From a German point of view, the tournament was very successful. Arkadi Naiditsch and Georg Meier scored 8,5 points but the big German surprise was Rainer Buhmann, who played a fantastic tournament. He even had a chance to win the tournament, but he lost against Grischuk in the last round. He played an excellent Chess960 game, had a pawn up and was on the upper hand, but the Russian top player showed his perseverance, power and experience. Buhmann was very disappointed after the game: “I might never get such a good occasion to win the FiNet anymore”. Symbolically, in the end he landed on 13th place… 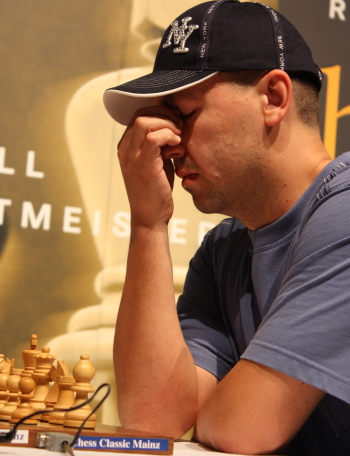 A great FiNet Chess960 open came to an end today. Never before, the tournament attracted more top level players. We even counted 106 players with an international title! The top ten had an ELO average of 2718, the total average of all 263 players in the FiNet Chess960 Open was 2170. The end of the FiNet Open marked the end of the Chess960 events this week in Mainz. The GRENKELEASING Rapid World Championship started on Friday, on Saturday the massive Ordix Open with around 700 players starts at 12.30.