Mr. Shirov is a chess legend. He is the man who played the most amazing chess move in history. On top of that, he has managed to stay one of the best players in the world for over one decade.
His playing style is very attractive – imaginative and brave – so he became known as the “fire on the board”. This year was one of his best; he won the super-strong Sophia MTEL tournament, coming in front of Bulgarian Veselin Topalov, who is the the current World’s Number One, and Magnus Carlsen from Norway, who is widely expected to be the next World Champion.

Mr. Shirov visited Sydney in the year 2000, when he played a display game against Indian Vishi Anand, the current World Champion. Australians get a chance to meet a world elite chess player once in a decade. This is an opportunity not to be missed.

Mr Shirov’s simultaneous game will be a part of the Gold Coast Chess Festival, which also features the Surfers Paradise Tournament, one of Australia’s premier chess events. Around one hundred of country’s best players are expected to participate. David Smerdon, Australia’s most recent Grandmaster, was the winner the last year and is coming to play again. The tournament also features a Fun Section for social chess players, ideal for beginners and children. The organizer of the Festival, “Kings of Chess” Chess Club Inc, is going to put the Gold Coast on the chess map of the World. For more information please contact the Club on 07 5578 5872 or 0414 673 228 or visit the website www.kingsofchess.biz. 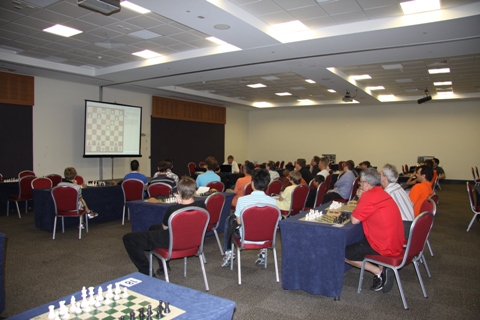 Alexei Shirov giving a lecture at the “Kings of Chess” Club