clear first place, a full point ahead of the competition 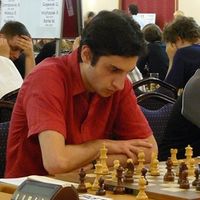 Tbilisi International Open Chess Tournament was held on 15-23th June at the Nona Gaprindashvili Chess Palace. This was arguably the strongest open tournament ever to take place in Georgia, with 18 men and 13 women grandmasters from the entire Caucasus region, Ukraine and Russia. There were 208 participants in total.

Top Georgian player, and the man whose chess brilliancy leaves nobody phlegmatic, GM Baadur Jobava, convincingly won the tournament on his home turf. Jobava won the final round against his compatriot GM David Arutinian to finish the race a full point ahead of the chasing pack.

It should be also pointed that untitled Georgian player Zurab Javakhadze finished on the high position by sharing the 2nd place with a number of seasoned Grandmasters.