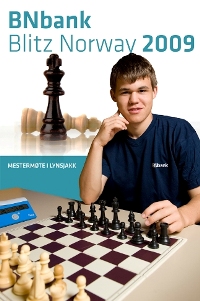 A strong field of players will participate in the BNbank Blitz 2009 which takes place in Oslo on Saturday, November 28. Among the ten invited players is the 18 year old Norwegian chess wonder Magnus Carlsen, who recently won the World Blitz Championship. The other contenders include Hikaru Nakamura, the 2009 US champion considered one of the strongest blitz players on the internet, Peter Heine Nielsen of Denmark, the second strongest chess player in the Nordic region, Jon Ludvig Hammer who is ranked as the second strongest player in Norway and two of the strongest female chess players in the world Victoria Cmilyte, Lithuania and Monika Socko, Poland, who recently won the strongest chess tournament ever played in Northern-Norway.

The organizers from the Norwegian Chess Federation will provide exclusive live coverage of the BNbank blitz chess through the Chessdom’s new live games platform – Chessbomb. Top games will be online starting 11:00 CET in the morning.

All information about BNbank blitz

In the preliminary rounds the players are divided into 4 double Round Robin groups. Two players from each group will qualify for the Quarter-Finals. The time control is 3 minutes + 2 seconds increment per move.

BNbankBNbank ASA offers a wide range of retail and corporate banking services. It was acquired by a consortium of SpareBank1 banks in December 2008. The bank is headquartered in Trondheim, and has offices in Oslo, Ålesund and Fosnavåg. Clients all over Norway are served via internet and telephone banking. In the retail market, BNbank ASA offers competitive rates on savings products, and the bank is one of the leading mortgage lenders in Norway. In the corporate market, the bank offers niche expertise within real estate, seafood, ship building, offshore service vessels and traditional shipping.

About The Norwegian Chess Federation