federation and government support may bring a bid from Manila

The Philippines might again be the site of the prestigious World Chess Olympiad and the Asian Zonal Chess Championships in the near future as the country opens its bid to host the two tournaments. The bid for the World Chess Olympiad can go for 2014 with strong federation and government support, while the Asian Zonal Chess Championships will be a good practice tournament for the World’s largest event.

Grandmaster (GM) Rogelio “Joey” Antonio, who has played many times for the Philippine Olympiad Team, shared with abs-cbnnews.com that National Chess Federation of the Philippines (NCFP) chief Prospero Pichay is pushing hard to host the competitions in RP. Antonio along with fellow GMs Eugene Torre and Buenaventura “Bong” Villamayor, are the founder of the NCFP which replaced the defunct Philippine Chess Federation.

The country hosted the 30th World Chess Olympiad in 1992 at the Philippine International Convention Center in Pasay City with no less than the late former president Corazon “Tita Cory” Cojuangco-Aquino leading the opening rites.

The 2001 Asian Zonal Chess Championships, on the other hand, was at the Grand Boulevard Hotel along Roxas Boulevard, Manila. 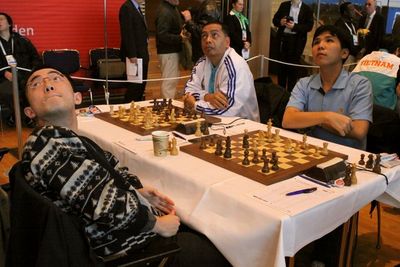