Topalov is preparing with Dominguez for the match with Anand 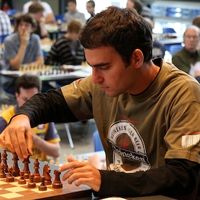 Leinier Dominguez Perez is the new second of the top rated FIDE player GM Veselin Topalov, revealed Nolan Cachon, from Radio Rebelde, Cuba. Leinier Dominguez, currently 22nd in the world with 2719, will be part of the team of Veselin Topalov for the upcoming World Championship 2010 match with Viswanathan Anand.

Dominguez has been invited to Topalov’s team due to the strong season he is having and thanks to the solid opening knowledge that the Cuban posesses. Another member of the team of Topalov, as the ChessCube WCC blog correctly suggested, will be GM Ivan Cheparinov, who has been working with the ex World Champion for many years.

Dominguez will now have to do double work, as he is preparing for the World Cup in Khanty Mansiysk.