Karpov will train with Victor Bologan for the match 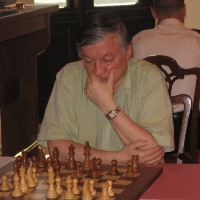 Anatoly Karpov is landing today at 21:00 CET in Valencia. He is coming several weeks prior to the match with Kasparov to accommodate, enjoy the city, and prepare for the historical clash.

Karpov will be in Valencia with a team of seconds. The name of Victor Bologan, winner of more than 40 international tournaments and U20 USSR champion, was revealed by the Russian GM.

Karpov comes to the match with a slightly negative balance of the results against Kasparov: five titles for the World’s Champion Title, with a balance of 19 victories, 21 losses and 104 draw. Still, Anatoly Karpov is highly determined to take the victory in Valencia, and later on to look for the victory in Paris.

Kasparov and Karpov share the same opinion. Both confirmed in front of the organizers that they are taking the rematch “with the same dedication as if it were the legendary final from 25 years ago.”

More about the match

The first news of the match in English

The video of the match

Kasparov and Karpov are still not talking to each other?

“25 years after the match, Kasparov and Karpov are still not talking to each other”, say the organizers from “Valencia cuna del ajedrez Moderno”. The two Ks do not want to see each other before the match and they will be using different hotels during their stay in Valencia. Karpov will be in Puerta del Mar, while Kasparov in Valencia Palace.

The cars with which they will arrive to the playing venue will be the same. However, they will stop in front of different entrances.
One of the requirements of the two players is to use different elevators to climb to the playing hall of Palau de Arte.