World Champion Anand, however, made his fans wonder. Apparently he did not manage to overcome the bad shape he had shown in the preliminaries and his play in the match for place three against Germany number one Arkadi Naiditsch was strangely uninspired and lacked punch. But maybe the explanation was much simpler. “Well, as there is not that much at stake in the match for third place, it is very difficult to motivate oneself”, he later explained at the press conference.

The first game showed how difficult both Anand and Naiditsch – who had also played in the Ordix Open where he finished second to Mamedyarov – found it to motivate themselves. Anand had White and chose a quiet Italian game, which ended in a listless 26-move draw. 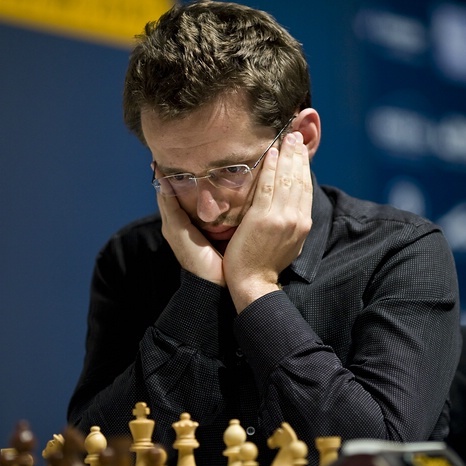 In contrast Aronian lived up to his role of favorite in his first game against Nepomniachtchi. On the white side of an English Opening he managed to convert positional pressure into something tangible when winning two pawns. Yesterday, the Russian managed to overcome a two-pawn-deficit against Anand, but against Aronian Nepomniachtchi was not that lucky. In fact, his only hope was the clock. Aronian had only seconds on the clock but the 5 second increment per move proved to be enough for the Armenian.

The second round proceeded in similar fashion. Naiditsch and Anand went into a well-known line of the Ruy Lopez and did not mind a draw when all rooks were swapped on the a-file.
Meanwhile, Nepomniachtchi did everything one tells beginners not to do. He neglected his development, left his king in the centre and advanced both his a- and his h-pawn in an effort to put pressure on Black. Unperturbed, Aronian developed quietly and when all his pieces were ready and his king had castled, he countered in the center. And suddenly things were critical for White. With little time on the clock, Nepomniachtchi went astray and fell victim to an assault on his king who was still stuck in the centre.

With two clear wins from the first two games Aronian was on the brink of winning the match and becoming new Rapid Chess World Champion. Indeed, he had no problems to clinch the title in the third game. With Black, Nepomniachtchi put his hopes on the Grünfeld Defense, but Aronian always had things under control and in an ending where Nepomniachtchi had no winning chances at all, the Russian finally accepted the inevitable: he agreed to a draw and Aronian was new Rapid Chess World Champion.

In the other match, however, Anand and Naiditsch continued to avoid all excitement. Both sides did not seem to mind a draw and after 23 moves the game was over. Score – 1.5:1.5. 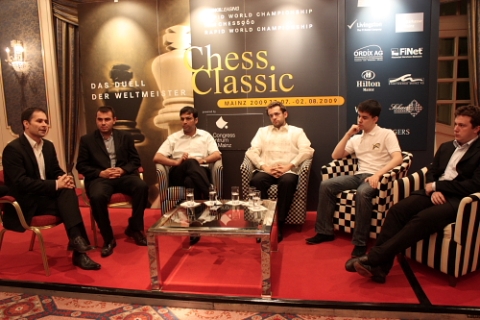 Now, the fourth game between Naiditsch and Aronian was a mere formality. And even though it was drawn after 25 moves the spectators saw some entertaining chess. With 1.e4 e5 2.d4 Nepomniachtchi played an unusual opening, which inspired Aronian to an unusual rook maneuver in the opening. And after this rook had done his duty, Aronian decided to sacrifice him. Black had a serious material disadvantage but the computer still liked Black’s chances better. However, Aronian decided not to tempt fate and opted for a draw through perpetual check. Final score 3-1.
Anand and Naiditsch again did not do much harm to each other and played the fourth draw of their match to share third and fourth place – traditionally in Mainz no tie-break is played in the match for third place.

So, Anand will have to wait for next year’s Chess Classic to get “his” title back. Aronian certainly welcomed such a rematch. As he said during the press conference: “It’s fun to play against someone who is tough. And Anand is really tough.”

It might well be that next year Aronian will indeed have a chance to see how tough Anand is. At the prize-giving ceremony organizer Hans-Walter Schmitt promised Anand a wild card – and the World Champion will not be the only one who is happy to return to the Chess Classic. To say it with the words of the new Rapid World Champion Levon Aronian: “This is such a wonderful tournament – everybody likes to play here.”