Vishy Anand and Levon Aronian to defend their titles

Yesterday the usual press conference marked the beginning of the Chess Classic Mainz, the world’s biggest Rapid Chess Festival. And after meeting the journalists Levon Aronian showed his skills in a 40 board simul.

The Chess Classic 2009, in which the world’s best players from Tuesday to Sunday will measure their skills in eight events, began Monday, 27th July, 2 pm with the press conference. Highlights of the Chess Classic are the two World Championships: From Tuesday to Thursday Levon Aronian, the world’s number four, will defend his title in Chess960 – the chess variant proposed by the late Bobby Fischer, in which the starting position of the pieces is randomly determined. Aronian’s rivals are Hikaru Nakamura, Viktor Bologan and Sergei Movsesian. From Friday to Sunday Vishy Anand, the reigning World Champion and 11-times winner of the Chess Classic, has to keep his own in the GRENKELEASING Rapid World Championship against Levon Aronian, Arkadi Naiditsch and Ian Nepomniachtchi.

At the press conference in the “Goldsaal” of the Hilton Hotel in Mainz the players, Jens Beutel, the mayor of Mainz and Hans-Walter Schmitt, Chess Classic organizer and president of the Chess Tigers, met the journalists. Hans-Walter Schmitt emphasized the significance of the Chess Classic, which has become a brand which is known all over the world. „The success of the festival can also be seen in the fact that a new tournament in London took up this name“, Schmitt remarked with a touch of irony.

Jens Beutel has not only been patron but for many years but for years has also been a big supporter of the Chess Classic. He significantly contributed to Schmitt’s decision to move the festival from Frankfurt to Mainz in 2001. Beutel, who just returned from his holidays, will not forego the pleasure to take part in the strong ORDIX Open. To regain a feeling for the pieces he played a short game with World Champion before the press conference. 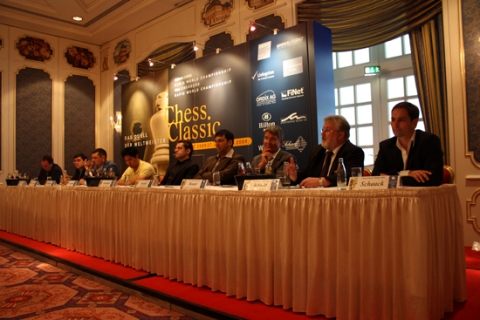 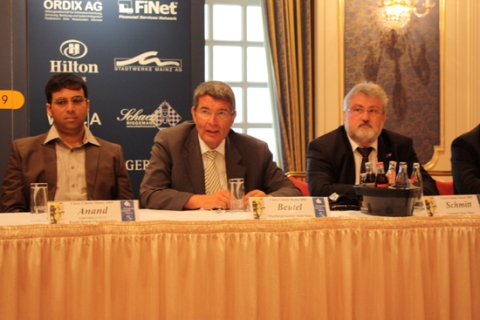 Vishy Anand, who won the Chess Classic no less than eleven times, faces a difficult task. All participants of the GRENKELEASING Rapid World Championship had remarkable success in recently Rapid Chess events. Arkadi Naiditsch for example just won a strong rapid tournament in Villarobledo in Spain, and thus could not make it in time to the press conference.
Levon Aronian, who plays in both World Championships, did not regard this workload as disadvantage. On the contrary. He said, “many participants of the Chess Classic are so enchanted by the atmosphere of the Chess Classic that they want to play as much as possible”. However, in the simul, which followed the press conference, he tried to speed things up a bit to avoid wasting too much energy.

The American shooting star Hikaru Nakamura, however, was not sure, whether he would be able to transpose the good form he had shown recently to Chess960. But Bologan, the only player, who hitherto managed to win both the FiNet Chess960 and the ORDIX Open, saw no difference between these two chess variants. “Both”, he said, “have the same rules. However, in Chess960 you can play more creatively, whereas in classical chess you can rely more of known opening variations.” The inspiration from Chess960, he said, helps him “to see more things and play more creatively in the rapid games”.

The random opening position makes it somewhat difficult to prepare for Chess960. However, Sergei Movsesian had the opportunity to take part in a Chess960 recently and therefore felt well prepared. 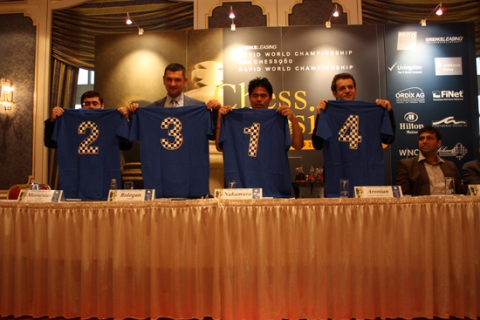 After the questions of the journalists Hans-Walter Schmitt proceeded to the drawing of lots. The players chose a T-Shirt with a starting number on its back. This resulted in the following pairings: In round 1 Nakamura will play Aronian while Movsesian will play Bologan; round 2: Aronian – Bologan and Nakamura – Movsesian; round 3: Movsesian – Aronian and Bologan – Nakamura.

After the press conference Levon Aronian played the simul, in which he took his 40 opponents to task. His result: 37:3. He did not lose a single game and conceded only six draws. Manfred Böttcher, Manfred Herbold (Schachhaus Ludwigshafen), Dr. Matthias Kribben (Zitadelle Spandau), Ulrich Gass (SC Eppingen) Timo Spiess (Bochumer SV 02) and Bernd Grill (SV Ebersbach) managed to take half a point away from the grandmaster. 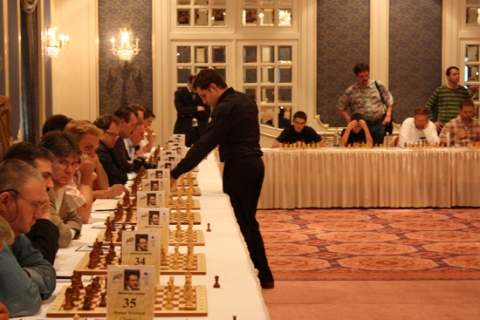 Levon Aronian during the simul

If you want to play in one of the open tournaments in Mainz you can directly register in the Rheingoldhalle until shortly before the tournament. Thursday and Friday you can join the world’s elite to measure your skills in Chess960 in the FiNet Open. Saturday and Sunday the ORDIX Open will take place, in which probably more than 700 players will take part. Tuesday and Wednesday afternoon belongs to the juniors U-16: They will play in the 3. Mini-ORDIX and 3. Mini-FiNet Open. And anyone interested in computer chess will not want to miss the 5th Livingston Chess960 Computer World Championship with Rybka & Co, which will be played from Wednesday to Friday.

The Chess Classic Mainz also offers excellent conditions for spectators. Several commentators explain the games, either in the silent or public viewing area, and a large number of monitors allow you to follow the grandmaster games from everywhere. The Chess Classic established new standards in the presentation of chess, which by now are adopted all over the world. And if you can’t make it to Mainz, you can of course follow the games live on the internet – every day hundreds of entertaining games will be transmitted live.