Bartel wins by large 2,5 points margin ahead of the second placed

Chessdom’s contributor GM Mateusz Bartel eclipsed the rest of the field and finished the tournament with a monumental score of 8,0 points out of 10 games, full 2,5 points ahead of the second placed GM Vlastimil Babula.

“Winning with such margin against a very balanced opposition is a big honour for me.” – Mateusz Bartel shared with Chessdom.com – “I am kind of an unpredictable player, and the most important thing is to make a good start at the tournament. Then, as it already occurred in some tournaments before, I can make a good performance. It happened exactly in Banicky Kahanec – I started 2,5 out of 3, winning both games with black pieces.”

He continued – “Effortless loss in round 4 to Tomas Polak, of course, made me upset, but I quickly recovered with nice win versus Babula in round 5. After the first half of the event I was in sole lead and I felt that I can win the race. The final five rounds went pretty well, and I secured the first place even before the last game.”
“Still, 8 of 10, and particularly 4,5 in the last 5 games, was very surprising result for me. This is probably my best performance ever.” – Mateusz said in conclusion.

The winner has kindly provided Chessdom readers with extensive analysis of his win against GM Ftacnik (replay bellow or download pgn file). 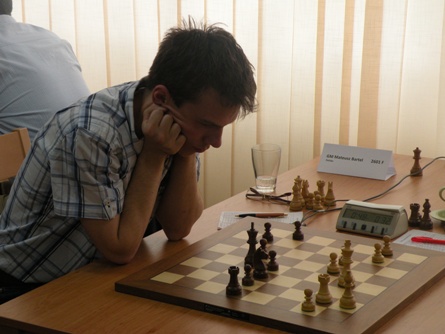 Round six report with replayable games