exciting last round leaves the title to China with 0,5 game points margin 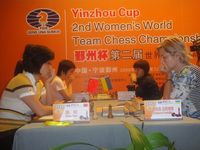 In a stunning last round China clinched the World Women Chess Championship title. The Asian team finished with the same match points as Russia, but half a game point advantage gave them the title.

Before the last round China had a match point advantage over the contenders. Ukraine, Russia, Armenia, and Poland were tied at second place, all aiming at the medals. However, none of the teams in the chasing pack had any hope for first, as China had to meet the 400 ELO points average lower team of Vietnam.

Having this setup, the events of the last round were more than dramatic. The team of Vietnam have tried on several occassions to get a victory, and was left several times half a game point from it. This time they put up a real battle against China, and in less than 40 moves the star team of Hou Yifan, Zhao Xue, Ju Wenjun, and Huang Quian were all held to a draw.

Russia immediatelly jumped on the opportunity. After defeating the six rounds in a row leaders from Poland, they had the difficult task to meet the unpredictable China 2. IM Nadezhda Kosintseva proved she is one of the top players of the event, by scoring yet another victory. WFM Gunina followed suit and scored on board 4. And just as everything looked fine for Russia, IM Tatiana Kosintseva and IM Kovalevskaya were held to draws to leave Russia just half a game point behind China in the final standings.

Poland could not withstand the pressure and gave in to Georgia with a 3:1 score. This was immediatelly used by Armenia and Ukraine, who had to decide the medals in a direct encounter. A gold medal and shared first with China was possible for Ukraine in case of a 4:0 victory. An early draw on Zhukova – Mkrtchian eliminated this possibility. Armenia took the lead after Danielian defeated Ushenina on board 1, but heroic Gaponenko and Zbedska gave the victory and the bronze medal to Ukraine.

The best player of the competition was Valentina Gunina. Despite her forfeit for being 1 minute late, she scored the fantastic 6,5/8.

The medals by boards are as follows (special thanks to IM Inna Gaponenko for the information!):