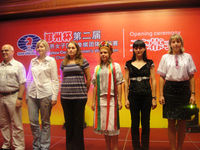 Ukraine brought the first surprise at the start of the Women Team World Chess Championship. They managed to hold to a draw the team of Russia, after last minute inclusion IM Inna Gaponenko defeated IM Kovalevskaya. Earlier victory by Nadezhda Kosintseva against Zhukova, and draws in Ushenina – Tatiana Kosintseva and Zdebska – Romanko left the match point split.

The medalist from the ETCC 2007, Poland, brought down the hopes for the first places of the team of USA. Early victory by IM Rajlich against IM Krush gave Poland the lead, and after securing draws on the other boards they emerged among the leaders.

Georgia seem to be in a jet lag, as they barely clinched victory against the 300 ELO points lower team of Vietnam. The match started with a loss of IM Khukhashvili against WFM Hoang Thi Nhu Y, and the top rated Georgian GM Dzagnidze was held to a draw by WGM Hoang Thi Bao Tram. It was IM Javakhishvili and IM Lomineishvili who had to apply full concentration to win the 2 points with black, that gave the minimal victory to Georgia.

Poland and Georgia are sharing secing position right after China A, who took the temporary first position after defeating their fellow compatriots from China B with 3:1 score. WIM Zhang Xiaowen proved again she is a top talent of China by holding GM Zhao Xue. 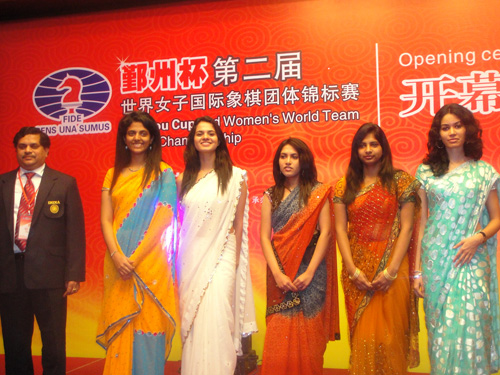 India with a difficult match

In the last encounter of the day, India and Armenia put up a very interesting fight. India took the early lead with WGM Karavade defeating WGM Galojan. However, Armenia turned around the match after IM Mkrtchian and WGM Aginian won their games against IM Schadev and WGM Mary Ann Gomes respectively. It was IM Harika Dronavalli who saved the day for India by defeating IM Danielian on board 1.

Here are the full results of the day. Games can be followed daily at the official site.