The chess federation of the Olympic Champion Armenia sent an official letter to Kalmykia early morning on June 30th confirming support for current FIDE President Kirsan Ilyumzhinov. “You have done a noticeable job for the expansion and development of chess during
the preceding years. We hope that in the future FIDE, headed by you, will perform new
actions for the further progress of chess,” states the letter.

With Armenia and Turkmenistan joining, the supporting federations are already 57, after the 55 nations announced yesterday. From the OneFIDE team expect another wave of support in the coming days. 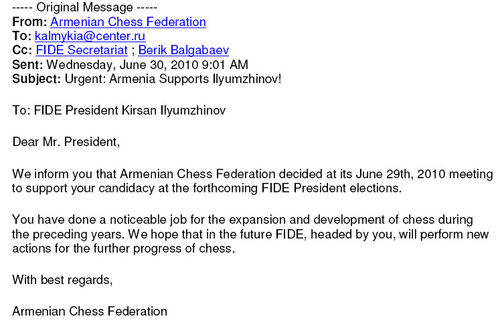 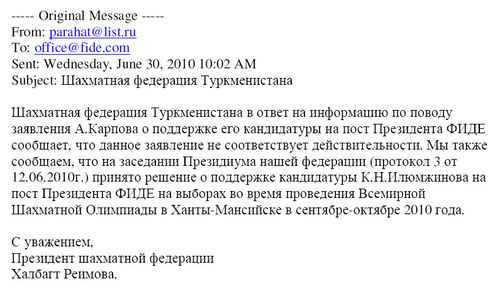 The Chess Federation of Turkmenistan as a reply to the information regarding A. Karpov’s statement on the support of his candidacy for the position of the FIDE President, is writing to inform that this statement does not correspond the actual reality.
We also inform that at the meeting of the Presidium of our Federation (Minutes N3 dated 12.06.2010) it was decided to support the candidacy of K. Ilyumzhinov for the position of the FIDE President at the elections during the Chess Olympiad in Khanty-Mansiysk in September-October 2010.