According to the newspaper “Standart”, Bulgaria is preparing huge investment to candidate for the host of the 2013 World Chess Cup and 2014 Chess Olympiad. Documents should be presented tomorrow to the FIDE Deputy President Georgios Makropoulos. The events would take place at the Black Sea resort Albena, where the playing hall is already under construction.

The 2012 Chess Olympiad will be played in Istanbul, Turkey.

This year’s Chess Olympiad is set for Khanty Mansiysk, Russia. The venue is the brand new Tennis Sport Development Center. The teams are already being announced, if you know other participants for the Olympiad, please, send the information to out contact form.

The candidatures were officially announced today at the press conference hosted by Stefan Sergiev, President of the BCF, Svilen Neikov, Minister of Sport and Tourism, and Stefka Kostadinova, legendary sportswomen and President of the national Olympic Committee.

The idea to apply for these events was born last year in Albena. The involved parties have worked to meet the conditions and deadline, which expires tomorrow. 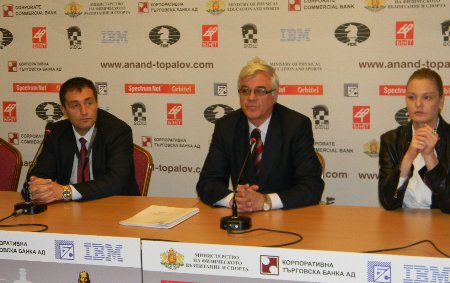 The candidature will be officially presented during the FIDE Congress in Khanty Mansiysk. In order to be competitive with offers from other cities, Albena will also apply to host the 2013 World Chess Cup.

Proposed dates for the Chess Olympiad are 20.9-4.10.2014, at the new sports complex in Albena. There is no prize fund, but all costs for all the teams would be covered by the organizers. FIDE tax is 350.000 EUR.