The record attempt to take place in November 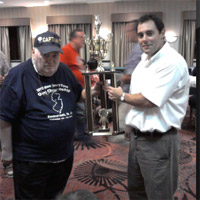 International Master Dean Ippolito from New Jersey is attempting to break the record of 500 simultaneous chess games. The record attempt will take place on Saturday, November 27, 2010, in the HealthQuest Sports Dome located at the Jack Cust Baseball Academy in Flemington, NJ. The 140,000 square-foot dome is the largest sports dome in the United States and is the perfect setting to bring this World Record back home to the United States.

The record mania started after GM Kiril Georgiev broke the record in 2008. The current record is held by 29-year-old Iranian Grandmaster Morteza Majoob, who set the record in Tehran at the Enghelab Sport Complex on August 13, 2009 under the supervision of the Iranian Chess Federation and FIDE. The World Record, named Rokh-dar-rokh 500 (rook vs. rook 500), consisted of 200 professional chess players, 280 chess enthusiasts and 20 cinema actors and sportsmen. Majoob finished with 397 wins, 90 draws and 13 draws for a score of 442/500, an 88.4 win percentage.

IM Ippolito also wants to break the 88-year-old winning percentage record in a simultaneous, which was set by World Champion Jose Raul Capablanca, who played 102 games and won 101 and drew 1 for a 99.5 percent score.

IM Ippolito has not lost a game in a simultaneous since the early 90s, which includes simultaneous wins against Masters, National Champions, and other top chess players. IM Ippolito routinely plays 50-player exhibitions and has played several exhibitions with over a 100 players, one of the first such when he was just 10 years old.