“Former World Champions Ask for the Disqualification of Ilyumzhinov”

“Elections for the new president of FIDE will be held on the 29th of September in Khanty-Mansiysk, during the time of the Olympics. As shown by all polls, the current FIDE President, Kirsan will win, because he has 93 votes, and his rival, Karpov has the support of only 23 members of FIDE.

When this fact became clear, Karpov and his main ally Kasparov are now trying to use their last trump.

They took their case to the International Sports Court in Lausanne, where together with the Federations of USA, France, Germany, Switzerland and Ukraine, have applied for the disqualification of Ilyumzhinov from the presidential race, claiming that he illegally stated his candidacy.

Representatives of Ilyumzhinov did everything to delay the consideration of this request, but the Court in Lausanne decided to hear the case and announced that they would will decide about the request next week.

This is the chance for Karpov, but also for Kasparov, who during a stay and lobbying in Sarajevo said – that in case of victory he would be the actual president of FIDE, and Karpov will be his puppet.” 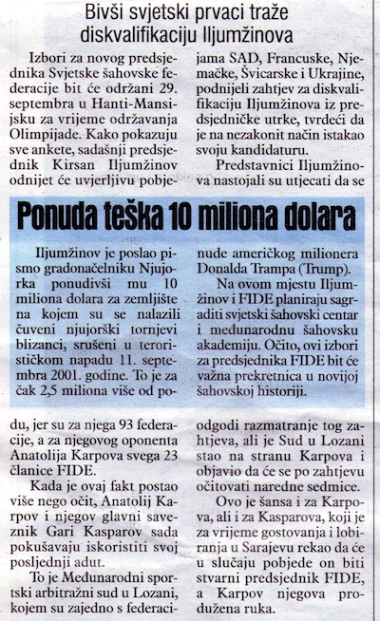