Regarding Ground Zero construction of the World Chess Center

As a continuation of the topic of Kirsan Ilyumzhinov’s idea to buy the land of the Twin Towers at Ground Zero New York, in order to build World Chess Center, we present you the official letter of the FIDE President to Michael Bloomberg, mayor of New York. 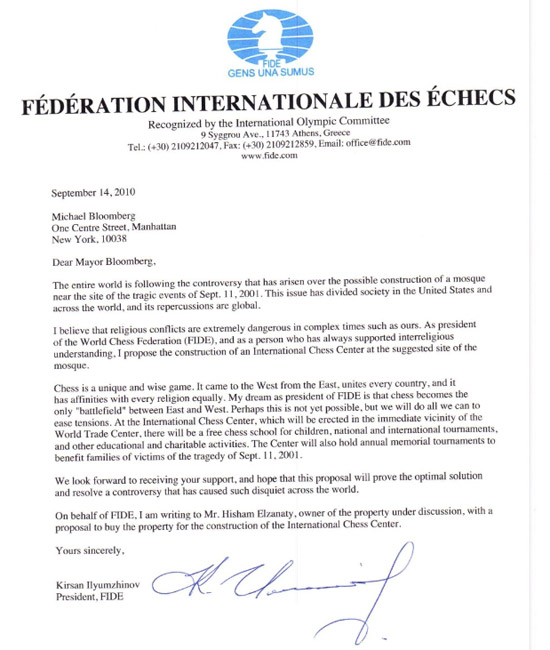 In his letter to Michael Bloomberg, Ilyumzhinov writes:

“This issue has divided society in the United States and across the world, and it’s repercussions are global. I equally respect all faiths and religions and I believe that religious conflicts are extremely dangerous in complex times such as ours.”

In recent comments to the news media, Kirsan Ilyumzhinov commented:

“As President of the World Chess Federation (FIDE), and as a person who has always supported inter religious understanding, I propose the construction of an International Chess Center at the site in question. Chess is a unique and intellectual game, it came to the West from the East, unites every country, and it has affinities with every religion equally. My dream as President of the World Chess Federation (FIDE) is that chess becomes the only “battlefield” between East and West. Perhaps this is not yet possible, but we will do all we can to ease these tensions. At the International Chess Center, which would be erected in the immediate vicinity of Ground Zero, there would be a free chess school for children, national and international tournaments, and other educational and charitable activities. The Center would also hold annual memorial tournaments to benefit families of victims of the tragedy of September 11, 2001.”

As early as last week, the property developer Trump offered to buy the site two blocks from Ground Zero, but the offer was turned down – according to news sources.