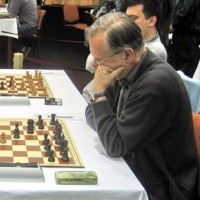 With great sadness we inform the public that the Director and Chief Editor of “Chess Informant”, IM Zdenko Krnić, tragically lost his life in Belgrade at the age of 62. Krnić passed away in the hospital on Friday, 23rd July, after suffering severe injuries in a traffic accident one week earlier.

Zdenko Krnić was born 1947 in Maribor (now Slovenia), and he spent the childhood in Sombor. He became National Master at the 1970 Yugoslav Championship in Vrnjačka Banja. His biggest success was silver medal at the 1980 Yugoslavia Championship in Skender Vakuf. He participated in more than 50 international competitions and held a title of International Master. For many years he was player and captain of the popular club “Red Star”.

He worked with Chess Informant for almost 40 years, on all levels, from contributor to director. During his carrier he co-operated with all of the world’s best players. He joined the Chess Informant during the preparation of issue 15, and the tragic accident happened when he was working on the issue number 108. Zdenko Krnić was injured on the crosswalk by a careless motorcycle driver who then run away.

The departure of Zdenko Krnić leaves huge blank in Serbian chess and “his” Chess Informant.